FROM AN ISRAELI HOUSE:
IS THE VIEW SCENIC OR IS IT MORE A NIGHTMARE? 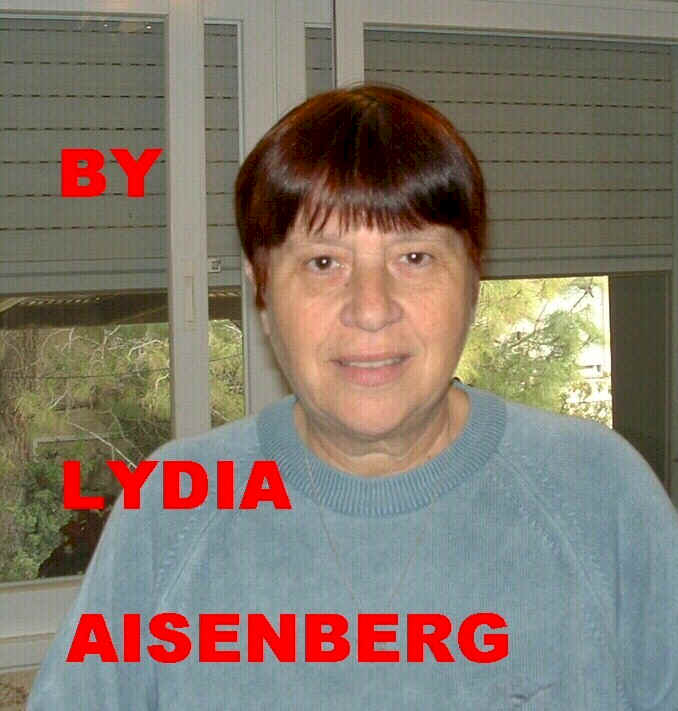 Israeli psychologist Orit Meoded lives in a dream house on a hill with a phenomenal view.

It doesn't take long to explain about the house, but one needs quite some time and a decent map to get through even the shortest explanation about the tremendous view below.

Orit's home is no normal room with a view. The Meodeds actually have brought new meaning to the term build-your-own-home scheme being as they have built theirs practically by themselves, and it happens to overlook one of the most complex areas outside of Jerusalem as far as old borders, new fences and possible future borders passing through are concerned.

Down below from the Meoded's manicured lawn and precision laid colourful flower beds in the Amir Mountain range community of Katzir, are a mixture of Palestinian villages and a few Jewish settlements on the West Bank side of the Green Line and Israeli Moslem villages on the other. Dotted here and there in between the large and small Israeli Arab villages are a number of kibbutzim, moshavim and a newish Jewish town in the making, Harish. There are two Israeli towns also visible through Orit's expansive lounge windows, that of the industrial town of Hadera close to the sea and Baka-el-Gharbiya, an Israeli Moslem town of 24,000 that hugs the Green Line.

Sitting snuggly at the bottom of Orit's rocky hilltop home, is the Muslim village of Barta'a, a village divided through the middle by the Green Line since l948 thus making one half of the villagers Israeli citizens and the other half, Palestinians in the West Bank. Some of the people from down there have worked and still do work for the Katzir Municipality, but folks from Katzir do not go "down there."

Blazed across the political and natural patchwork landscape down from her home and across to a West Bank mountain range in the distance, is a swath of sandy area snaking its way up, over and around the lower hills, eventually disappearing over the brow of the aforementioned range of mountains.

This wide yellow snake in the greenery marks the infrastructure of the new security fence under construction, running very close to the old '48-'67 border in this area, but with some minor detours that are going to prove major obstacles for some area inhabitants, both Jewish and Arab.

As it happens the wadi that marks the Green Line in this area is virtually impossible to see from above as the whole area is covered with dense green shrubbery. However, the newly cut course of the fence and patrol roads to be on either side of it, grabs the eye as the newly churned sandy ground is devoid of anything but the metal poles already in place.

From Orit's kitchen, the practically invisible Green Line runs more or less through the middle-centre of her view below, basically dividing the area underneath her home to "here" and "there." With the new realities that the fence under construction will bring, a "where" can also be added.

Some Palestinian villages and Jewish West Bank settlements have ended up between the security fence some have now dubbed "The New Frontier" and the Green Line. The question

Where  is'Here"
and
where is 'There'?

some folks are asking is definitely "where will we be," part of the State of Israel, or a lean slice of Shomron on the wrong side of the fence. Will this be a strip of land in limbo, an inhabited no mans land? At this stage nobody living in the area seems to know and few of those who live outside the area seem to care.

As the portion of the new fence running immediately down the hill from Orit's passes behind East Barta'a, that means that the 4,000 Palestinian residents of that half are between a fence and a hard place, the Green Line, which for them is the end of the line being not allowed over and into Israel.

"Here" is the State of Israel. From the Meoded family vantage point, to the right one sees the coastline from the southern slopes of the Carmel Mountain down to Netanya and Tel Aviv. The Hadera Power Station sits high and mighty on the shoreline, its three giant chimneys sticking up like mammoth fingers toward the sky, red lights flashing all around the upper sections. A ship can be seen about to dock and offload its belly full of coal to the power station.

A short head movement is all it takes to whisk across the 26 kms flat as a pancake land below as far as the Green Line, and entering "there," the northern portion of the West Bank, Shomron or Territories as it is also known by some. The Green Line is also known as The Seam. Whatever the terminology, to explain the who-is-who of "down there," their relationships and the new realities of the fence the government stresses is not a border, not for now nor in future, gets more and more complicated.

For instance, the new security fence means for some Palestinians that their homes are still in the West Bank but the fields that provide their livelihood are over the other side, between the fence and Green Line.

Will they be allowed to pass through the fence to work their land is their main question. For other Palestinians, the fence passes behind their homes, leaving them in the area between Green Line and fence but their farmland on the other side.

Will the Palestinian folks in the land of limbo be given special passes enabling them to cross over the Green Line to Israel---for medical treatment, for shopping or whatever. Again, yet no clear answers on that one, either.

And what does it mean for the Jewish folk in the settlements? Shaked, Hannanit, Tal Menashe and Reichan, are also caught in limboland, with the new fence an electrical divide between them and their fellow settlers in the Dotan Valley, such as Mevo Dotan and Hermesh that are left over the other side.

However, the majority of the 700 families that live on top of the Amir mountain in Katzir have little to do with the folks down below and most are oblivious of the growing complications for those living under their mountain perch, or even the settlements over the Green Line a matter of minutes drive down the road from them.

The Meoded family in many ways is typical of the youngish families that comprise the majority of folks in Katzir. Most of the people do not originate from the immediate area, quite a few are kibbutz born and educated or from other rural communities such as moshavim, and at least 25% are new immigrants from the former Soviet Union and other countries.

Both Orit and Ran were born and educated in Jordan Valley kibbutzim and have two children, Asaff (7) and Itamar (2). In l990 they went to the United States where they spent seven years during which time Orit studied psychology at UCLA. Upon their return to Israel they looked for a quiet place with good quality of life to set up home and Katzir fit the bill perfectly, and they got a glorious view thrown in as well.

"When we came to live here it was after Oslo, the peace process was underway and nobody thought about anything but living here peacefully and getting on with our lives," explained Orit, a psychological adviser to both Jewish and Arab schools.

"When we lived in America, the neighbourhood store owner was a Lebanese and the local garage owner Syrian, and we all got on famously," she said. "I suppose when we came back after that 'time out' we were a little like greenhorns on this new block."

In front of the Moeded abode, infrastructure is already in place for new homes to be constructed and the land divided up into plots.

"Unfortunately, since the intifada of September, 2000, Israelis have become hesitant to build a home here," said Orit, gazing out of her kitchen window down below where there is a lot more cooking than meets the eye.  ##

CLICK HERE TO GET TO INDEX OF COLUMN NINETY-EIGHT