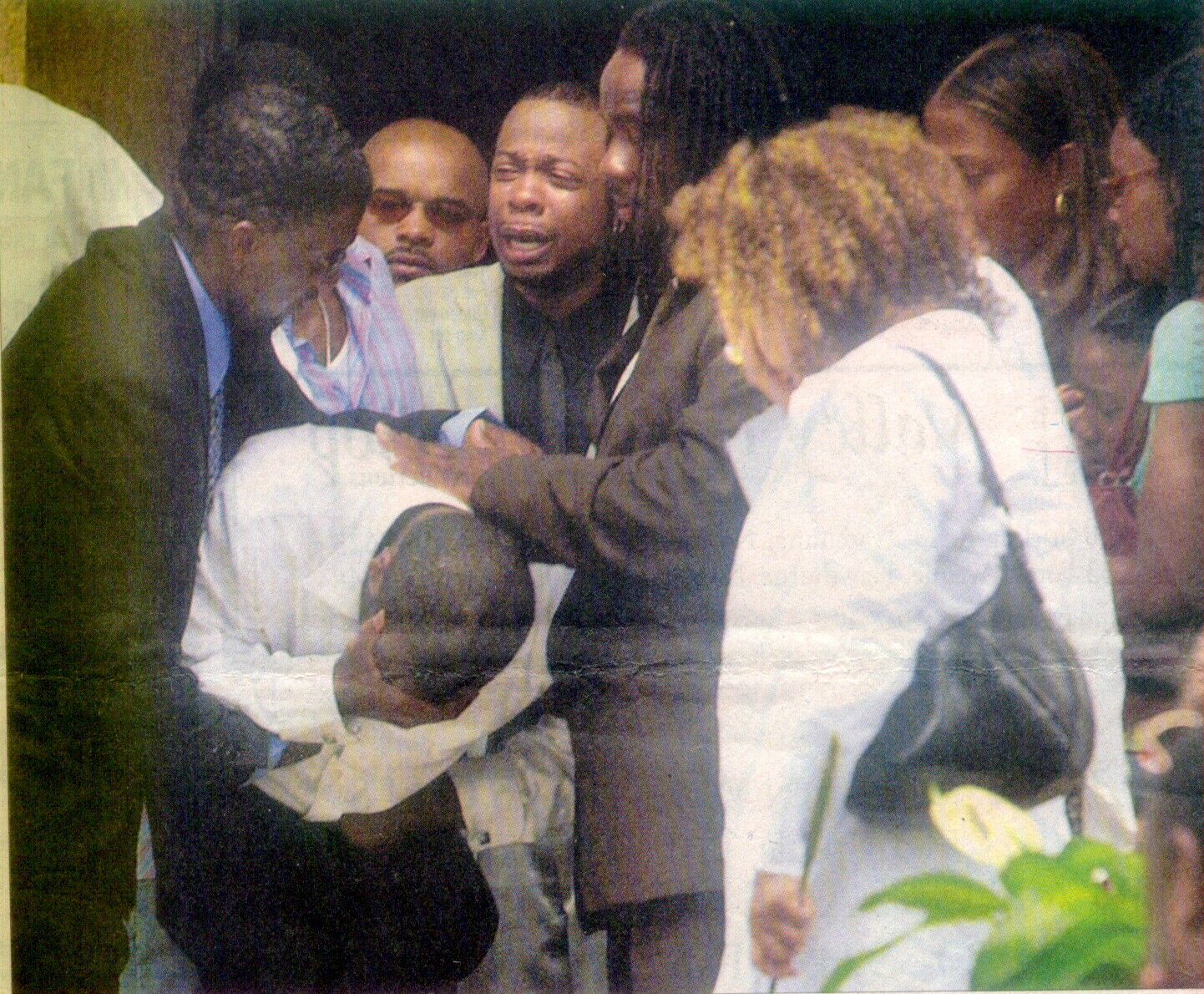 Newark police blocked off South 10th Street between Madison and Clinton Avenues on Saturday, August 16, enabling the limousines to triple-park in front of the home of my dear friends, world-renowned poets and civil rights activists Amiri and Amina Baraka.

The waiting escort of four police motorcyclists was only one indication of the greatest display I've seen in their home city of the power and importance of the Baraka family. Tragically enough, this greatest display of Newark's reverence occurred on the occasion of the greatest grief and pain ever suffered by the Barakas---the funeral of the baby of their family, 32-year-old Shani Isis Makeda Jones Baraka.

The night before the funeral, when I entered Newark's ultra-modern Metropolitan Baptist Church, bedecked with floral wreaths, for the viewing, I found myself in a slow-moving line of mourners that immediately kept lengthening until it extended out the doors of the church and started circling the block as Newark's black community came to pay its respects.

The line became so long that it ended up taking four hours for everyone in it to pass before Shani's open casket, which lay under floral arrangements made to look like basketball backboards with basketballs and rims. Next to Shani's open casket was that of her best friend, Rayshon "Ray-Ray? Holmes. The two women had been found shot to death on Tuesday, August 12, in the Piscataway, New Jersey home of Shani's half-sister, Wanda Wilson Pasha, Amina's daughter by a previous marriage.

As Amiri has pointed out, Newark is now mostly "a black and brown city? and the slow-moving line that passed before Shani's bier included not only relatives, friends, neighbors and the curious but also tearful teenage members of the athletic teams Shani had coached to victory and sobbing students she had taught at Newark's Vailsburg middle school. It took four hours for the line to pass before the two open coffins, where Amina stood sobbing as she held the clasped hands of her murdered daughter.

"I stood there for four hours holding her hand," Amina told me afterwards, "and it felt as if she was squeezing my hand, too."

The murders not only devastated Amina, Shani's five older brothers, and Ray Ray's family but the killings were especially painful to Amiri, still tortured by the 1983 rape and murder of his sister, Kimako, a Broadway dancer, actress and choreographer.

"But without their money," he replied.

As if standing guard at Shani's coffin were her five older brothers, all overcome with grief. I noticed that the face of one of them in particular---Ras, a Newark deputy mayor---was as much full of anger as sorrow. In his tribute to his slain sister in the church at her funeral the next day, Ras broke down as he told of the time Shani comforted and instructed him when he himself was a basketball coach. But he pulled himself together and proved he was as effective as his talented father in stirring an audience with his oratory. With his face wet with tears, Ras condemned domestic abuse and asked:

There was no doubt in Ras? mind or in that of any member of his family as to who the killer was. At Shani's wake in the church the previous night, rapper and film star Queen Latifah, a friend of

Why didn't the police arrest Wanda's estranged husband after he held a gun to her head?

the Barakas, also blamed domestic abuse for the murders. Urging women not to waste time in getting out of abusive relationships, she said that their families didn't fail Shani and Ray Ray but that "It was the system that failed them."

Amiri was especially distressed by the inability of the Piscataway police to arrest 35-year-old James Coleman, aka Ibn El-Amin Pasha, Wanda's estranged husband after Coleman entered Wanda's house last June 15, pointed a handgun at her head and said, "I should kill you!"

'they said they couldn't find him," Amiri told me. "All they had to do was to look for him in Newark City Hall."

Amiri said Coleman could've been found at his job there, where he worked as a $29,000-a-year Newark health investigator, a position gotten for Coleman by Amiri's youngest son, Amiri Jr., often referred to as "Little Amiri." An aide to Newark Mayor Sharpe James, Amiri Jr. was unaware of his half-sister's domestic problems. The mayor, by the way, was one of the dignitaries who spoke to the more than 1,000 mourners at the Friday evening wake.

Disdainfully referring to Coleman as a "Republican," Amiri told me his entire family had been left unaware of Wanda's domestic problems.

"If she'd only told us," he said, "I coulda done something."

Coleman had the reputation in Newark's black community of being a 'showboat." A would-be rapper, he once operated a hair salon and also staged fashion shows at a hotel in the area. After pleading guilty to drug possession and distribution charges in East Orange in 1989, he served two years in prison. Following his parole, he started organizing black unity rallies. And then got involved with Cleveland Browns football hero Jim Brown's organization, Amer-I-Can, which helps parolees rejoin their communities.

According to Amiri, Coleman left the organization "under a cloud" and the Coleman
family spokesperson, Shahid Watson, is being sued by Brown for unauthorized
reprersentation in New Jersey as a franchise of Amer -I-Can.

Wanda married Coleman three years ago and put up with Coleman's abuse until last January, when she threw him out of the Piscataway house. After which, according to Amiri, Coleman fired bullets into Wanda's outdoor swimming pool. According to Amiri, Coleman began stalking Wanda. He followed her to a friend's house in Newark and while she visited inside, he set her car ablaze. Wanda subsequently obtained a restraining order against Coleman, installed floodlights on her property and got a pit bull as a watchdog.  Shani, who had been staying with Wanda, at that point stopped coming to her house.

It was on Tuesday, August 12, that Shani, accompanied by Ray Ray, returned to the house to get some of her things. Wanda, who was staying with a friend in Las Vegas, had made arrangements with a neighbor's kid to feed and walk the pit bull. When the kid entered the house the next day, August 13, he noticed a body lying in a downstairs family room. Immediately, he telephoned Wanda, who, in turn, notified Piscataway police. Learning that the police had been called to Wanda's house, Amina asked her sister, Sheila Johnson, to find out what was going on.

Sheila said she couldn't get any closer to the house than the police cordon around it. At first she was told that there were two deceased male bodies inside. It was only later that she learned the dead persons were female. Eventually, she identified a photograph of Shani that the police brought to her. Shani had been shot through the heart. Ray Ray, lying dead next to Shani, had been shot more than once.

At the Friday evening wake, Amiri and Amina exchanged hugs with Ray Ray's family. Amina, consumed with the thought that Ray Ray was murdered only because she was with Shani, collapsed, weeping:

"Bring him in! That was my baby and he killed them! He needs to be locked up."

The next day, when I arrived at his house for the funeral, Amiri told me he didn't want his sons to be vigilantes and have to go to jail for avenging their sister's murder. At the church that Saturday morning, he addressed the mourners, saying:

'those boys are sitting here with smoke coming out of their ears, but we going to let you do your jobs. But I'll tell you this, officials. If you don't find them quick, if you don't bring them into that precinct, if you don't find him soon, you know he will be found!"

The day after the funeral, on Sunday August 18, Coleman, accompanied by an attorney, surrendered to Piscataway police.  ##