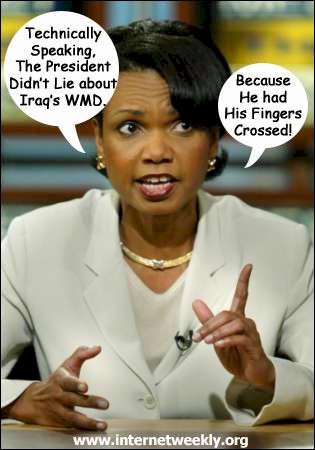 Does the president not read? Does his national security staff, led by Condoleezza Rice, keep him in the dark
about the most pressing issues of the day? Or is this administration blatantly lying to the American people to secure its ideological ends?

Those questions arise because of the White House admission that the charge that Iraq tried to buy uranium from Niger was excised from a Bush speech in October 2002 after the CIA and State Department insisted it was unfounded. Bizarrely, however, three months later---without any additional evidence emerging---that outrageous lie was inserted into the State of the Union speech to justify the president's case for bypassing the United Nations Security Council, for chasing U.N. inspectors out of Iraq and for invading and occupying an oil-rich country.

This weekend, administration sources disclosed that CIA Director George Tenet intervened in October to warn White House officials, including deputy national security advisor Stephen Hadley, not to use the Niger
information because it was based on a single source. That source proved to be a forged document with glaring
inconsistencies.

Bush's top security aides, led by Hadley's boss, Rice, went along with the CIA, and Bush's October speech was edited to eliminate the false charge that Iraq was seeking to acquire uranium from Niger to create a nuclear weapon.

We now know that before Bush's January speech, Robert G. Joseph, the National Security Council individual who reports to Rice on nuclear proliferation, was fully briefed by CIA analyst Alan Foley that the Niger
connection was no stronger than it had been in October. It is inconceivable that in reviewing draft after draft of the State of the Union speech, NSC staffers Hadley and Joseph failed to tell Rice that the president was about to spread a big lie to justify going to war.

On national security, the buck doesn't stop with Tenet, the current fall guy. The buck stops with Bush and his

Lies, lies, lies that America's Yahoos keep eating up and swallowing without question

national security advisor, who is charged with funneling intelligence data to the president. That included cluing in the president that the CIA's concerns were backed by the State Department's conclusion that "the claims of Iraqi pursuit of natural uranium in Africa are highly dubious."

For her part, Rice has tried to fend off controversy by claiming ignorance. On "Meet the Press" in June, Rice
claimed, "We did not know at the time---no one knew at the time, in our circles---maybe someone knew down in the bowels of the agency, but no one in our circles knew that there were doubts and suspicions that this might be a forgery."

On Friday, Rice admitted that she had known the State Department intelligence unit "was the one that within the overall intelligence estimate had objected to that sentence" and that Secretary of State Colin Powell had
refused to use the Niger document in his presentation to the U.N. because of what she described as long-
standing concerns about its credibility. But Rice also knew the case for bypassing U.N. inspections and
invading Iraq required demonstrating an imminent threat. The terrifying charge that Iraq was hellbent on
developing nuclear weapons would do the trick nicely.

However, with the discrediting of the Niger buy and the equally dubious citation of a purchase of aluminum tubes (which turned out to be inappropriate for the production of enriched uranium), one can imagine the
disappointment at the White House. There was no evidence for painting Saddam Hussein as a nuclear threat.

The proper reaction should have been to support the U.N. inspectors in doing their work in an efficient and timely fashion. We now know, and perhaps the White House knew then, that the inspectors eventually would
come up empty-handed because no weapons of mass destruction program existed---not even a stray vial of
chemical and biological weapons has been discovered. However, that would have obviated the administration's
key rationale for an invasion, so lies substituted for facts that didn't exist.

And there, dear readers, exists the firm basis for bringing a charge of impeachment against the president who employed lies to lead us into war.