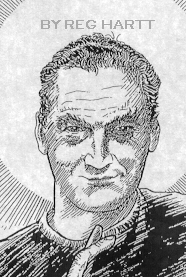 One of the more profitable books we can read is Norman Cousins' ANATOMY OF AN ILLNESS.

This is his account of how he nursed himself back from the grave by watching Charlie Chaplin, the Marx Brothers, Laurel & Hardy, etc.

Told he had six months to live Cousins' decided he would die laughing.

What he did was take his mind off his illness so that his body could heal itself.

Early in my teens I read a book in which medical missionary to Africa Albert Schweitzer said to a journalist who complimented him on his charity.

Around the same time I read THE RISE AND FALL OF THE THIRD REICH. In it I discovered that the Nazis did medical experiments in which they froze people to the edge of death.

The group to whom they gave blankets and pills all died.

The group they made have sex all lived.

Laughter
can
CURE you!

realizing Billy the Kid is about to die from pneumonia jumps into bed with him. Billy lives.

THE I CHING, which I discovered in 1968 and which I have spent over thirty years studying, teaches that the superior man takes no medicine in an external illness.

For the last couple of years my stomach has been killing me. "You need bran flakes," my doctor said.

Well, after a year of bran flakes I had regular bowel movements plus a stomach that was killing me.

So a couple of months ago he ran tests. I am now taking medication (losec) and right from the first pill the results were astonishing. The energy I did not have came rushing back. That, however, was not an external illness but an internal one.

When I was a kid my Dad regularly applied the Irish school of discipline to my backside.

I wanted to put an end to his beatings without using force.

I tried everything I could think of. Nothing worked.

One day I got it into my head that if I started to laugh before my father struck me I would feel no pain.

I engineered the biggest beating my poor father ever gave me.

Just before he struck my butt with the piece of wood he held in his hand I surrendered myself to laughter. The harder he beat the louder I laughed.

He never struck me again.

The Native American people teach that when we beat a child we pound the evil into him/her.

I know this is true.

More powerful than laughter is to be among other people who are laughing.

I get to enjoy this pleasure on a regular basis.

People don't laugh at modern movies the way we do at old ones.

The BBC ran live the twenty minutes of solid laughter which is the climax of Charlie Chaplin's THE GOLD RUSH when it premiered in Britain at ALBERT HALL.

Now, if you have never sat in a theatre and listened to a few thousand people laugh themselves into apoplexy watching Chaplin, Keaton, or Laurel and Hardy, well, you don't know what you are missing.

That experience, which once was so common, is now very, very rare.

People read Cousins' book then go out and rent videos but watching movies by ourself is like making sex with ourself.

It just does not work. We need to be with others.

This damned internet is creating a whole world of people who live second hand fantasy lives through their computers.

Nonetheless in my animation and Chaplin, Keaton, etc. film festivals I get to enjoy the sound of people having more fun in the living room of my house than they have ever had in a regular movie theatre. I also get to be uplifted by their pleasure.

So I guess the key to a happy and healthy life is to take as much joy as we can in what life brings us and to have sex like monkeys.

Come to The Cineforum for one of my  cartoon fests or for one of my Charlie Chaplin fests. Bring a friend. Then go home and have the kind of sex where the bed drips with sweat.  ##