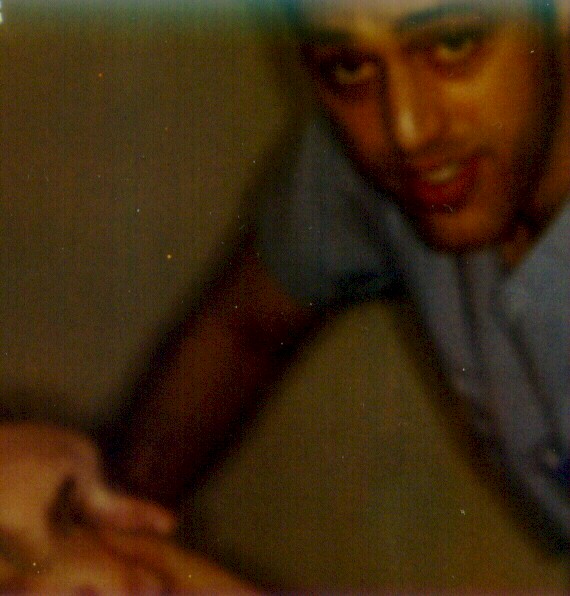 DR. ARIAL OSTAD AT WORK ON A PATIENT

I am the victim of a skin cancer plague that is spreading around the world maybe faster than AIDS, SARS, Flu or Monkeypox. Why? Because of the ever-widening hole in the ozone layer above Antarctica at the bottom of the world. Through this hole has been pouring the sun's deadly ultra-violet rays, otherwise shielded from us by the ozone layer. That widening hole above the South Pole is also one of the reasons for global warming.

In a Fortune magazine I have stolen from the office of Dr. Arial Ostad, billionaire conservationist Ted Turner says the chances of humans becoming extinct in 50 years are no more than 50-50. Things don't bode well for my grandchildren.

It is June of 2003. I am at Dr. Ostad's office because one of his assistants has called me in for a checkup. I first went under Dr. Ostad's scalpel some five months previous. At that time, I'd already been sliced open by other surgeons and I wasn't looking forward to more scalpels.

My skin cancer adventure started with a growth that popped out on my face alongside my nose. The local dermatology clinic biopsied it and, finding the growth to be a basal cell cancer, recommended I have it removed at the hospital's radiation lab. Then a friend told me his father had had the same thing.

"He had his cut out," the friend said. "Why do you want to let yourself get all that dangerous radiation. Sure, the surgery left a hole in my father's face, but the hole soon filled in and now his face is as good as it was. And no scars!"

Then another friend told me she had to same kind of surgery. And then other friends started telling me about cancerous growths having been cut off their faces, too. It seemed the same thing was happening to a lot of people.

'skin cancer is common," Dr, Ostad assured me on my first visit to his office. His office is on Lexington Avenue in New York, a block away from Hunter College. As Dr. Ostad explained, basal cell cancer is a simple matter compared to the much more ominous and life-threatening melanoma. I didn't even want to know about any worse forms of skin cancer. But I was happy to learn that basal cell skin cancer is usually non-lethal.

Dr. Ostad is a master of "Moh's surgery?---a term I at first mistook as "mole surgery."  "Moh's surgery? gets its name from the Dr. Frederick Moh, the surgeon who pioneered the procedure.

First the surgeon slices off the growth at approximately skin deep---but not before mapping exactly where the growth protruded from the skin. Then he microscopically slices off the base of the severed growth like a deli owner slicing a cut of salami for a sandwich. He puts the slice under a microscope to see if any cancer roots remain and to determine exactly where they are.

While the Dr Ostad or his technicians were looking through the microscope to see if my growth had cancerous roots, I was sitting inside Dr. Ostad's waiting room trying to read a magazine with one of my eyes partially covered by a big bandage plastered to the side of my nose. During the procedure inside one of the Dr. Ostad's examining rooms, I'd hardly felt him sticking needles into my face to anesthetize the area. And I hadn't felt it at all when Dr. Ostad cut the cancer off my face. After he and an assistant had bandaged me up,  they'd told me to go outside in the waiting room and wait.

If the cancer roots go deep, they keep cutting off more slices from the patient's face until the microscope tells them there are no more roots. What happened n my case was that the microscope said Dr. Ostad had gotten the entire cancer with his first cut. They called me back into the examining room, gave me a booster shot to keep that part of my face numb and all I felt was Dr. Ostad stitching up the wound. He didn't even have to bother to finish stitching. He---the master---did the "inside? stitching so as not to leave a scar. One of his technicians---to an old man like me, they all look like movie starlets---took care of the "outside? stitching. Dr. Ostad has a staff of "???eleven. The movie starlet technicians working in the examining rooms with the doctor wear lab coats or scrubs. The eight gorgeous knockouts working in the outer office dress like ladies.

"What a harem!" I thought. But Dr. Ostad is not a pasha. He is a married man. I asked him if he takes the growths he cuts off his patients and feeds them to the cats and he laughed. After ridding my face of the ugly growth, he also chopped off a cancer that looked like a worm growing out of my back.

Now it is a pleasant June afternoon five months afterwards, and I am in for a checkup. I undress and don a gown so Dr. Ostad can inspect me in my birthday suit. He finds a growth above my lip and a mole beneath my right breast. He takes a medical instrument that reminds me of a nail clipper and says:

'this is going to pinch a little."

Then, he clips off the two suspect growths, known as solar keratoses. In each case all I feel is a very distinct pinch. Then he puts bandaids on the wounds, his assistant hands me an instruction sheet for aftercare and I'm done for the day. He is going to send the tissue he clipped off me to a lab for a biopsy.

"Why did you choose Moh's Surgery as your specialty?? I ask Dr, Ostad.

"Because I like the artistic aspect of medicine and Moh's Surgery allows me to incorporate art into what I do. Basically, removing the skin cancer leaves someone with a wound and then you have to reconstruct that wound to put things back together and it's like sculpting the face, so there's an art component."

"And you had to become a dermatologist first??

"I chose dermatology because skin diseases are not serious for the most part----whether it's acne or rashes, psychologically it bothers the patient. I liked being able to make the patient feel better psychologically."

Dr. Ostad started his practice six years earlier. Now, at 37, he's doing a land-office business, with patients all but lining up at his door. With his reputation quickly spreading, he gets a lot of referrals from other doctors. He says his practice has especially grown within the last three years. He said he currently sometimes sees as many as 40 or 50 patients a day,

'skin cancer is really an epidemic," he explains. 'that's another factor. More and more people are coming down with skin cancer because of the sun's ultra-violet rays. The reason definitely is that the ozone layer is depleting because of all this industrial pollution. The pollution creates holes in the ozone layer and the sun's ultra-violet rays are getting stronger.

'this didn't start with George W. Bush becoming president. Industry has become more advanced. A cure would really help. And I think we're getting closer to it---certainly newer information is coming out that's exciting about non-surgical ways of treating skin cancer."

The skin cancer plague didn't start with George Bush and won't end with him, either. Blessed with nothing but good fortune since his birth, he remains untouched by the skin cancer plague. But, having spent so much of his time on golf courses, he, too, may one day have to undergo Moh's surgery. Apparently as wooden as a marionette that has no outward signs of being troubled by emotions, he remains impervious to scientific warnings that the deteriorating ozone layer is the cause of global warming.

According to the New York Times, the Bush White House edited out sections of an Environmental Protection Agency report concluding  'that warming is at least partly caused by rising concentrations of smokestack and tail-pipe emissions and could threaten health and ecosystems."

"Among the deletions were conclusions about the likely human contribution to warming from a 2001 report on climate by the National Research Council that the White House had commissioned and that President Bush had endorsed in speeches that year," the New York Times reported, "White House officials also deleted a reference to a 1999 study showing that global temperatures had risen sharply in the previous decade compared with the last 1,000 years. In its place, administration officials added a reference to a new study, partly financed by the American Petroleum Institute, questioning that conclusion."

The American Petroleum Institute, of course, represents Big Oil, for which Bush has demonstrated more love and patriotism than he has ever shown for America. The entire Bush administration is made up of corporate executives more interested in lining their own pockets than in enhancing the public weal. Corporations, of course, are inhuman entities that care only for profit. Corporations don't have grandchildren. As far as corporations are concerned, the sun can get hot enough to burn us all to crisps.

An Internet search tells us that the skin cancer plague in Australia is spreading by leaps and bounds faster than a stampede of terrified kangaroos. In Chile and Argentina, the skin cancer plague is also running amuck. That's because Australia, Chile and Argentina are in the Southern Hemisphere---much closer than the rest of the world to the widening hole in the Ozone layer over Antarctica. Consequently, the Argentineans, the Chileans, and the Aussies (of both the white-skinned and aboriginal variety) get a stronger shot of the Sun's ultra-violet rays.

What keeps widening this hole in the Ozone layer?  Pollution. The burning of fossil fuels and fossil duels are nothing but the oil and coal for which George W. Bush has demonstrated so much love. ##