GREGORY PECK AND ME 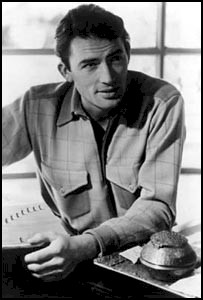 Gregory Peck and I never met, but there was something about me that bothered him. To me, as to most Americans of the day, he was a movie hero, always playing roles on the side of righteousness. I believed in what I thought he believed in. Offscreen, he seemed to believe in the same things I believed in, too.

In those days, I was a star feature writer on the New York Post, no big deal, considering that the Post had a staff of mostly petty-minded putzes---me included. No, I wasn't too brilliant in those days. Because one of the editors had a reason for wanting to get me out of town, my bosses assigned me to only God remembers which of the many feature stories that carried me to Hollywood. I sure don't remember which.

They were filming To Kill a Mockingbird while I was in Hollywood and another thing I don't remember is why my research brought me to the set. I certainly was delighted to be able to be there.

Based on a semi-autobiographical Pulitzer Prize-winning account of Harper Lee's upbringing by her widowed father, attorney Amasa Lee, amid the

Something
about me
bothered him

Gregory Peck plays Atticus Finch---the small-town attorney. The scene in which he addresses the jurors in the hot, stuffy and packed Southern courtroom has since been judged by at least one group of experts as the No. 1 dramatic scene in all of filmdom. I certainly agree that it is an intensely riveting scene. And I was on the set when they were filming it.

On the set, the courtroom and the jurors were circled by microphones, lights, camera and spellbound onlookers, one of whom was me. It is in this scene that Gregory Peck tells the jurors:

"Now gentlemen, in this country our courts are the great levelers, and in our courts all men are created equal. I'm no idealist to believe firmly in the integrity of our courts and of our jury system. That's no ideal to me. That is a living, working reality. Now I am confident that you gentlemen will review without passion the evidence that you have heard, come to a decision, and restore this man to his family. In the name of God, do your duty. In the name of God, believe Tom Robinson."

Lights! Camera! Action! So Gregory begins his speech. He gets into it a little and, while facing the circle of onlookers, his gaze falls on me. And he stammers. Cut! He starts the scene again.

"Now gentlemen, in this country our courts are the. . ."

I forget which is the exact point in his speech that his gaze falls  on me again. And again he stammers. Cut!

He begins a third time:

"Now gentlemen, in this country our courts are. . ."

His face meets mine and he stammers again! Cut!

They shoot the scene again and Gregory Peck wins the Academy Award.  ##

CLICK HERE TO GET TO INDEX OF COLUMN NINETY-THREE