sm
COLUMN NINETY-ONE, MAY 15, 2003
(Copyright © 2003 The Blacklisted Journalist)
ACCORDING TO NEWSWEEK:
BUSHIES KNEW MORE ABOUT COMING 9/11 ATTACKS THAN WHITE HOUSE WANTS TO TELL 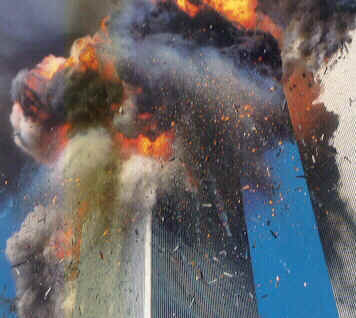 [Even in the face of accusations that the Boy Emperor had foreknowledge of the 9/11 attacks and just callously let the planes plow into the World Trade Center and the Pentagon, America's unelected President insists on rendering himself further suspect by trying to thwart an impartial inquiry into the 9/11 events.

It's already been documented that George W. Bush represents Big Oil, that Big Oil wanted a pipeline through Afghanistan, that when the Taliban pissed on the Bushies' sweet talk about the pipeline, the Bushies needed a provocation to get rid of the Taliban. As we've said time and again,  secrets are the tools of tyranny. And now the Boy Emperor tries to keep secret the facts of 9/11. Why does Bush want to keep pointing the finger at himself like this? Is it that he just doesn't know what he's doing?]

The Secrets of September 11

By Michael Isikoff and Mark Hosenball

The White House is battling to keep a report on the terror attacks secret. Does the 2004 election have anything to do with it?

Even as White House political aides plot a 2004 campaign plan designed to capitalize on the emotions and issues raised by the September 11 terror attacks, administration officials are waging a behind-the-scenes battle to restrict public disclosure of key events relating to the attacks.

At the center of the dispute is a more-than-800-page secret report prepared by a joint congressional inquiry detailing the intelligence and law-enforcement failures that preceded the attacks---including provocative, if unheeded warnings, given President Bush and his top advisers during the summer of 2001.

The report was completed last December; only a bare-bones list of "findings " with virtually no details was made public. But nearly six months later, a "working group" of Bush administration intelligence officials assigned to review the document has taken a hard line against further public disclosure. By refusing to declassify many of its most significant conclusions, the administration has essentially thwarted congressional plans to release the report by the end of this month, congressional and administration sources tell NEWSWEEK. In some cases, these sources say, the administration has even sought to "reclassify" some material that was already discussed in public testimony---a move one Senate staffer described as "ludicrous." The administration's stand has infuriated the two members of Congress who oversaw the report---Democratic Sen. Bob Graham and Republican Rep. Porter Goss. The two are now preparing a letter of complaint to Vice President Dick Cheney.

Graham is "increasingly frustrated" by the administration's " unwillingness to release what he regards as important information the public should have about 9-11," a spokesman said. In Graham's view, the Bush administration isn't protecting legitimate issues of national security but information that could be a political "embarrassment," the aide said. Graham, who last year served as Senate Intelligence Committee chairman, recently told NEWSWEEK: "There has been a cover-up of this."

Graham's stand may not be terribly surprising, given that the Florida Democrat is running for president and is seeking to use the issue himself politically. But he has found a strong ally in House Intelligence Committee Chairman Goss, a staunch Republican (and former

"I find this process horrendously frustrating," Goss said in an interview. He was particularly piqued that the administration was refusing to declassify material that top intelligence officials had already testified about. "Senior intelligence officials said things in public hearings that they [administration officials] don't want us to put in the report," said Goss. "That's not something I can rationally accept without further public explanation."

Unlike Graham, Goss insists there are no political "gotchas" in the report, only a large volume of important information about the performance and shortcomings of U.S. intelligence and law-enforcement agencies prior to September 11.

And even congressional staffers close to the process say it is unclear whether the administration's resistance to public disclosure reflects fear of political damage or simply an ingrained "culture of secrecy" that permeates the intelligence community---and has strong proponents at the highest levels of the White House.

The mammoth report reflects nearly 10 months of investigative work by a special staff hired jointly by the House and Senate Intelligence Committees and overseen by Eleanor Hill, a former federal prosecutor and Pentagon inspector general. Hill's team got access to hundreds of thousands of

Secrets
are the
tools of tyranny

pages of classified documents from the CIA, FBI, National Security Agency and other executive-branch agencies. The staff also conducted scores of interviews with senior officials, field agents and intelligence officers. (They were not, however, given access to some top White House aides, such as national-security adviser

More than two months later, the working group came back with its decisions---and some members were flabbergasted. Entire portions remained classified. Some of the report---including some dealing with matters that had been extensively aired in public, such as the now famous FBI "Phoenix memo" of July 2001 reporting that Middle Eastern nationals might be enrolling in U.S. flight schools---were "reclassified." Hill has since submitted proposed changes to the working group, pointing out the illogic of trying to pull back material that was already in the public domain. But officials have indicated the "review" process is likely to drag on for months---with no guarantees that the "working group" will be any more amenable to public disclosure.

A U.S. intelligence official cited international distractions as at least one reason for the delays. "In case you hadn't noticed, there have been two wars going on," the official said. The official added: "We're working this [report] to try to get it out without putting lives at risk and without endangering sources and methods." Asked why the working group was refusing to permit disclosure of material that had already been made public, the official said: "Just because something had been inadvertently released, doesn't make it unclassified."

The administration's tough stand, some sources say, doesn't augur well for the National Commission on Terrorist Attacks---which is conducting its own investigation into the events of 9-11. Already, flaps have developed on that front, as well. When one commissioner, former congressman Tim Roemer, last week sought to review transcripts of some of the joint inquiry's closed-door hearings, he was denied access--- because the commission staff had agreed to a White House request to allow its lawyers to first review the material to determine if the president wants to invoke executive privilege to keep the material out of the panel's hands.

"I think it's outrageous," says Roemer, who plans to raise the matter at a commission hearing this week. But a commission staffer says he expected the White House review to be finished by the end of the week, and it was unclear whether the president's lawyers would try to invoke executive privilege---a stand that would almost certainly provoke a major legal battle with the panel.

The tensions over the release of 9-11 related material seems especially relevant---if not ironic---in light of recent reports that the president's political advisers have devised an unusual re-election strategy that essentially uses the story of September 11 as the liftoff for his campaign. The White House is delaying the Republican nominating convention, scheduled for New York City, until the first week in September 2004---the latest in the party's history. That would allow Bush's acceptance speech, now slated for Sept. 2, to meld seamlessly into 9-11 commemoration events due to take place in the city the next week.

Some sources who have read the still-secret congressional report say some sections would not play quite so neatly into White House plans. One portion deals extensively with the stream of U.S. intelligence- agency reports in the summer of 2001 suggesting that Al Qaeda was planning an upcoming attack against the United States---and implicitly raises questions about how Bush and his top aides responded. One such CIA briefing, in July 2001, was particularly chilling and prophetic. It predicted that Osama bin Laden was about to launch a terrorist strike "in the coming weeks," the congressional investigators found. The intelligence briefing went on to say: "The attack will be spectacular and designed to inflict mass casualties against U.S. facilities or interests. Attack preparations  have been made. Attack will occur with little or no warning."

The substance of that intelligence report was first disclosed at a public hearing last September by staff director Hill. But at the last minute, Hill was blocked from saying precisely who within the Bush White House got the briefing when CIA director Tenet classified the names of the recipients. (One source says the recipients of the briefing included Bush himself.) As a result, Hill was only able to say the briefing was given to "senior government officials."

That issue is now being refought in the context over the full report. The report names names, gives dates and provides a body of new information about the handling of many other crucial intelligence briefings---including one in early August 2001 given to national-security adviser Rice that discussed Al Qaeda operations within the United States and the possibility that the group's members might seek to hijack airplanes. The administration "working group" is still refusing to declassify information about the briefings, sources said, and has even expressed regret that some of the material was ever provided to congressional investigators in the first place.  ##

CLICK HERE TO GET TO SECTION TWO: BY MOLLY IVINS;
THE HITLERIAN 'BIG LIE'