LETTER FROM NASHVILLE:
THE DIXIE CHICKENS 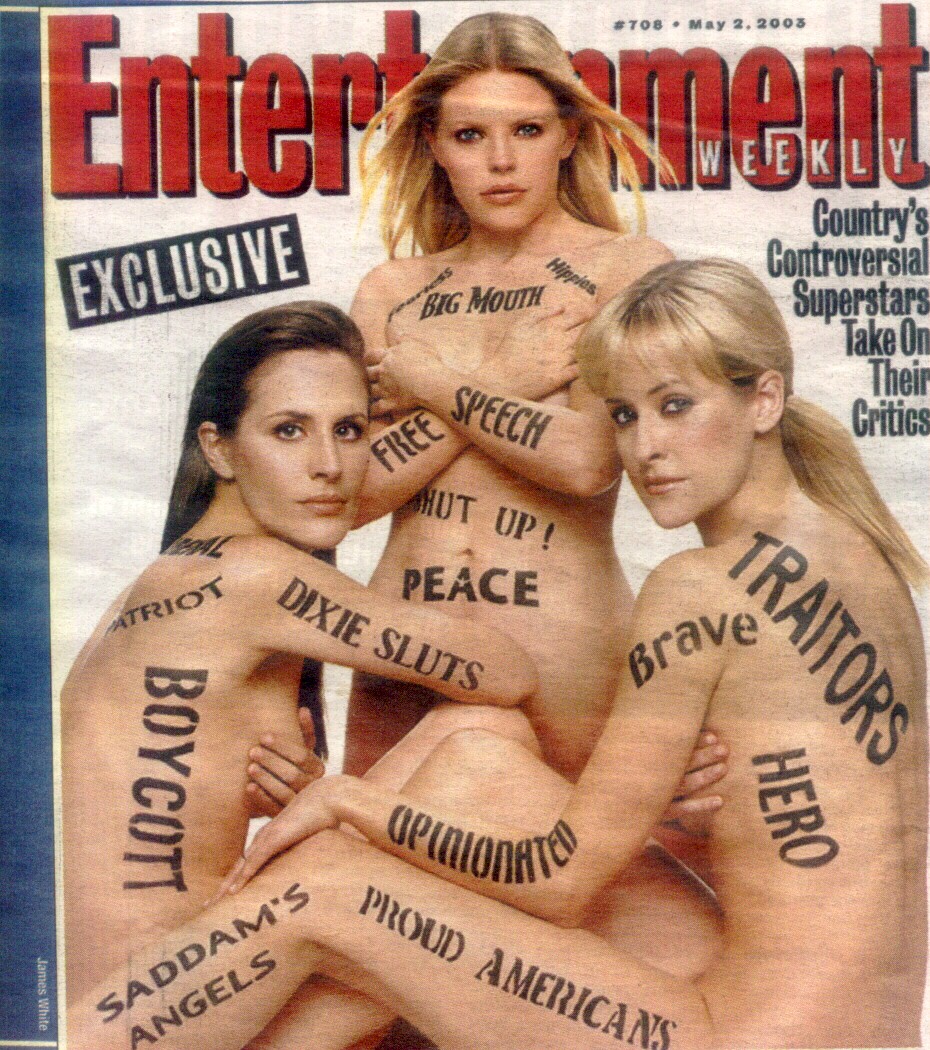 The apology to President Bush widely circulated on the Internet and attributed to Natalie Maines is, sad to say, not her work.  It comes from this site: http://www.thespeciousreport.com/2003_dixiechicks.html , which has no affiliation with the Chicks, and was written by an unidentified satirist there, who oughta come forward to claim his prize.

We in the U.S. may arguably be described as a people driven by kneejerk responses.  Thus, when Natalie and the other Chicks found themselves onstage in London in front of thousands of fans in a nation comprised of a populace that hugely wanted no part of Desert W. Storm, it was easy for Nat to get carried away and denounce the President? It was  a kneejerk response to the moment, a cheap way to get applause.

Back in the States, when the right-wingers who pretty much control radio here got wind of Natalie's denunciation of W, there was also a kneejerk response. The announcers jumping on the post-9/11 patriotic fervor (another kneejerk response itself) in turn denounced Natalie and the Chicks.   There were, in some places, station-sponsored mass burnings of Dixie Chicks? CDs---similar to the response to John Lennon's out-of-context remarks about the Beatles? popularity as opposed to that of Jesus.  Kneejerking program directors across the country began pulling the Chicks from their playlists.

Anyway, when Sony Records, no longer the Chicks? label but still their distributor, caught wind of this building catastrophe, they immediately kneejerked and let the Chicks? management know in very certain terms their feelings about the radio stations? embargo.  Management

kneejerked and jumped in Natalie's shit.   Poor Natalie.  Only trying to be popular and forthright about her feelings; maybe she felt a sense of duty to people in Hollywood whom she admired. But she got caught with her knickers down.  Her response was a kneejerk apology to the President.  The Dixie Chick became a Dixie Chicken.

"Country music? is nothing if not patriotic.   And like today's patriotism, it is nothing if not hypocritical, unthinking (or worse, cynical) in its manipulation of its public.  Here are a couple of examples:  on the Chicks latest CD, Home, the leading tune, the one with air- and jukebox-play, is not a country tune, but a cover of the Stevie Nicks chestnut Landslide.  Another "country? artist---we know he's country because he affects a ten-gallon hat and the currently ubiquitous short VanDyke beard---Tim McGraw, has dipped into the Aerosmith catalogue.

In the recent Country Music Television awards show, Flameworthy was notable in that, in every category---songs and videos with a patriotic smell---won hands down.   Well, it's just the temper of the times, I guess.  But any hour's listening to country stations will reveal a shallowness, a similarity of both singing and writing styles, that will grind you down into nothing---as Townes VanZandt would say, if you pay attention to it for longer than that.  These similarities were, until 9/11 at least, characterized by sassy, strident women singers and songs and whining, repentent men singers and songs. And there is a very definite corporate, economic basis for these characterizations: the Proctor and Gamble demographic.

It works like this:  the 'target? audience for country music radio stations is a married woman between about 24 and 40.  Though she may feel like a glamorless drudge and may feel trapped in a loveless relationship with a man who does not appreciate her, she is nonetheless the controller of ninety percent of the family budget.  It is she who goes to the supermarket, she who makes the day-to-day purchasing decisions.  The guy could care less about dishwashing detergents, because, well, he doesn't do the dishes.  At least if he can avoid it.  He makes the big decisions: the Car, the Bass-Boat, the Riding Mower, all of which he sees advertised on sports TV, sandwiched between beer commercials.  But he couldn't care less what brand of soap, toothpaste, oven cleaner, floor care products or toilet paper the family purchases.  Therefore, because he is not interested in these purchases, radio writes him off and tunes into the little woman's musical needs.

And what are those needs?  She wants to hear songs about getting her own back on that cheating, uncaring sonuvabitch she lives with or who left her.  She wants to hear a man begging her forgiveness for being such a cheating, uncaring sonuvabitch.  Thus, strident sassy women and whining repentent men are the backbone of popular "country" radio..  Well, since airplay is driven by the need to sell product, and since airplay is also necessary to the marketing of recordings, pretty soon the production and manufacture of recordings falls into a groove supportive of what's already there, That is pretty unshakeable. Until an EVENT such as 9/11 comes along and, for a time at least, displaces the "ordinary? cares of life with patriotic fervor.  Or so it seems to me.

And Natalie?  The Dixie Chicks? shows, during the height of the furor, continued to sell out months in advance.  It turns out that she could have, having stated a kneejerk opinion, stuck to her kneejerked guns.

I wish she had.   Her recanting gives much more of an indication of her character than her denunciation of W.  See you at the impeachments.  ##