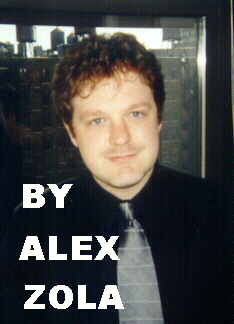 I received my severance lay from Julia on a calm Sunday evening in early June. She was wearing a tight black silk skirt with fruit on it. The effects of her drinking were showing in her hips. Earlier, we had gone to a Chinese restaurant where the meal included all the free white wine that you could slam back; several carafes.

"Do you want me to wear wonder bras more often?"

"Help me. My family is always trying to help you be better, look better, act better."

"Is that for you or for them??

She ripped the buttons off of my shirt in her rush to get it off. I have yet to sew them back on.

Julia once told me that she had a boyfriend that went to see the local hooker before he would sleep with her. She screamed like that to pump his ego, my ego. (I'm sure if there was a pun it wasn't intended.)

The next morning, when I got out of the shower, her suitcase was packed and ready to go.

"Alex, I can't handle this relationship any more."

We screamed and yelled. We walked out to the stoop and screamed some more.

"When men get angry they get physical."

"When have I ever hit you??

"Never. But my mother said that you might hit me, someday."

"Because you scream. You're half Irish. Irish men hit women"

"You scream back. Domestic Violence is not related to genetics. Tell me why, Julia. Just tell me why. Why leave. Just yesterday and the day before you were telling me how good I was to you, with you."

I couldn't wait to hear the excuse. Her words came in a torrent.

"My old boyfriend is coming to town from Argentina! I asked you to shave more and you didn't listen!"

And so on. Some of her etceteras were very interesting.

"No they're clean. I know that you're making a concerted effort. WHY?"

"Alex, you just don't make enough to buy me. I need to be bought. I need to be taken to fancy dinners and on fancy vacations. I'm sorry to be so blunt, but you just wouldn't let it go. I'm shallow Alex. It's not like I said that I loved you or anything."

"You told me you did yesterday."

She hailed a cab and left. I sat down and shook my head. Arguing in the daylight with a plainly deranged Princess.

That was the last time I saw Julia. When she moved out I don't know. All I know is that I walked in and that fucking Monet print was gone. I put up my punk rock posters. One week later, I got a letter. Julia told me how sorry she was, it was bad timing, maybe in time, etc., etc. and could she borrow $100.00? It ended with an Alainis Morrisette quote. I slumped down under my Zen Arcade poster. It felt like the right way to be wretchedly depressed. I had to face the facts. The last year of my life, my relationship with Julia; it was nothing more than a Power Ballad video.

Three months later, after intensive therapy with a natural but Schedule 1 fungus and the Butthole Surfers, I was ready to find a fallback. I had but one prerequisite; (Aside from my usual---Who wrote Tears of a Clown" I'm willing to give partial credit.) she had to be American, WASP-y. Blonde hair, blue eyes. No ethnicity whatsoever. I wanted a stupider version of Jennifer Marlowe from WKRP. There was a time when I thought about dating tall Irish red heads. In short, Mom. But the urge went quickly away. Too Freudian.

With all that in mind, my first attempt at forgettable sex (plus spankings) to forget Julia was with Chrissy Van Hull from West Hartford, Connecticut. She was an attractive young (20) blonde that I met in a Journalism class I was auditing at NYU. We went to dinner at the Cajun, at 16th Street and 8th Avenue.

"Zola, what kind of last name is that??

"Really. I'm really a Jew. Wanna see?? I smiled and stood up with my hand on the button of my jeans.

'stop that and sit down. They'll be time for that later." She grabbed my forearm and gently glided me down to my chair.

She had a point. It was to far too early in the dating matrix to be engaging in this kind of dangerous flirting. Besides that, almost every guy was circumcised these days

"I never would have guessed that you were Jewish."

"A little bit. That and you don't look Jewish."

"Irish. A very cute Irishman with a wonderful cleft chin."

"I like cleft chins."---She ran her hand slowly up to the top of her beer bottle. It was all I could do to keep my eyes in my head---'that and your big blue eyes and your reddish hair. You look Irish."

"Well, that's because they removed the horns."

"What horns? Jews have horns??

"You went to a private school, right??

"Right. A private Catholic school for girls. What does that have to do with this??

'the nuns didn't teach you that Jews have horns??

"Of course. I work out. Seriously though, Jews have horns. They're removed at the bris."

'that's the, you know, cutting. The circumcision."

"You're so funny. You just mention the word bris??

"Protection." I smiled and she laughed.

"When does that happen??

"For boys, on the eighth day."

"And how about girls." She said, thinking to trap me.

"Well, girls are named in the synagogue. So right before the ceremony, out come the horns?

She was seriously confused. Now, I had to close the deal.

"Look, Chrissy, where are you from again, West Hartford??

"Yes."  She threw her blonde hair from one side to the other.

"Didn't you have any Jewish folk around??

"No, not really. No one that admitted to it. It's like, I never really knew any Jews until I came to New York."

'so you never saw a Jew before."

The two sides of her upbringing were competing for dominance. That liberal New England everyone is a human thing, and her native Catholic conservatism.

"Have you ever seen Michaelngelo's MOSES??

"Michaelangelo. He was a second rate Renaissance artist."

"Yeah. See, around the 15th Century, we learned that if you took the horns out before the 1st year, they didn't have time to take root."

"You're lying. I know you're lying!!!" She threw her hair around, finally pulling it into a ponytail and putting it over her left shoulder.

"No. It's the truth." Finding two ridges in my forehead, I ran my fingers into them. 'the only problem that we have is that they leave these little indentations."

"Let me feel." She demanded. "Oh my G-d. OH MY GAWD. I CAN FEEL IT. I CAN FEEL IT!" Her eyes were wide and there was a smile on her face. Half the patrons at the bar area turned to see what was going on. She did sound like she was achieving orgasm.

"Excuse me, are you the Zola party of two?? The hostess came up us. Chrissy's hand was still in my hair. The hostess looked perplexed---something like "We have to get these loud people out of this bar ASAP."

"Your table is ready." We got up to follow her into the dining area.

"Good. I'm starved." Chrissy said, taking me by the hand.

Waking up next to Einstein isn't going to be a problem. "Jesus," I thought. "How am I going to respect myself in the morning?"  ##