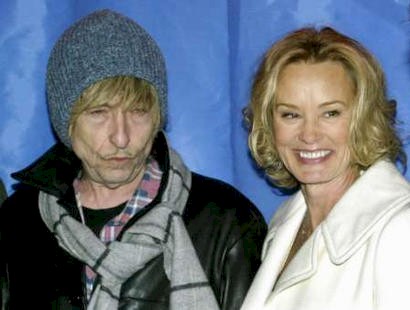 He has Dylan pics on his site. I believe this is The Sundance Film Fest.....

It was Wednesday around 5:30 pm when I caught sight of the besieged main entrance to Park City's Eccles Theatre. Hundreds of ticket holders, press, volunteers, photographers and security guys were swarming all over like bees. The occasion was the 6 pm showing of MASKED AND ANONYMOUS, a combination mumbo-jumbo speechfest and Bob Dylan music show from director Larry Charles (CURB YOUR ENTHUSIASM) and producer Nigel Sinclair.

Well, no...that's partly bullshit. The crowd was actually this big because of the expected live presence of Dylan, along with costars Jeff Bridges (a no-show), Penelope Cruz, Jessica Lange, Luke Wilson, Mickey Rourke, John Goodman, Val Kilmer and Christian Slater. But...well, mainly Dylan. Most of the crowd probably hadn't listened to anything he'd recorded since the mid '70s, if not earlier, but the mystique of the poet-troubadour lives on.

Hell, I was feeling it myself at the Eccles, and even more so when I had a brief chat with Dylan at the after-party at Lakota. For many of us, or me at least, Dylan resides on some kind of mystical, mythical level up there with Marlon Brando, Lenny Bruce, John F. Kennedy and Malcolm X...which made it seem all the more perplexing that he was headlining a movie this smug and boorish.

It's kind of a fanciful dream piece about a weary, seen-it-all musician and former legend named Jack Fate (Dylan) looking back on his life as he prepares to perform in a benefit concert. It's all taking place in some dusty, police-state, third-world country, but which is obviously a poorly camouflaged Los Angeles. The concert's booze-sipping producer, Uncle Sweetheart (Goodman), who's in debt to some fierce criminal types, can't get anyone to perform except Fate, whom he bails out of a local jail.

And then the stars walk on and do their stuff. Jeff Bridges plays a journalist (and another booze-sipper) who interviews Fate, Jessica Lange is some kind of type-A publicist (I think), Luke Wilson is a devoted fan, Val Kilmer is a halfwit prophet with a pet rabbit, Mickey Rourke is some jaded government bigwig, and so on. And there's an ending that may remind some of Robert Altman's NASHVILLE.

At one point Fate says to Sweetheart, "I hope you pull it off"---but exactly what needs to happen for the concert to be called a success, or how anyone or anything is supposed to benefit from it is never made clear. (It wasn't to me, at least.) I don't think Charles or Sinclair or Dylan really cared. They just wanted a premise that would (a) allow for Dylan/Fate to perform a few tunes and (b) provide a framework for several burnt-out, over-the-hill or flamboyantly spirited characters to walk into the frame and explain what it all really means, man.

That's what most of this move is about---speeches. Most are directed at the impassive, for-the-most-part unreadable Mr. Fate, who sometimes replies with a cryptic comeback and sometimes not. They're all about some aspect of Jack's life, or Dylan's life, or the spiritual life of anyone old enough to have absorbed '60s music at the creation -- values, dreams, disappointments, cop-outs, corruptions. We're talking the get-down, do-or-die, cut-through-the-cheddar-cheese truth of things, dude.

It's mostly pretty embarrassing stuff, and especially so for Dylan since he and Charles, I was told during the after-party, are responsible for most of the dialogue. (Even though Sergei Petrov and Rene Fontaine are the credited screenwriters.)

Maybe I'm the problem. Maybe this is a work of extraordinary revelation and vitality and I can't see or enjoy this, for some reason. Maybe MASKED AND ANONYMOUS will play better when it gets trimmed down a bit. But with the absence of anything resembling a story or flesh-and-blood characters or a compelling arc, most of it struck me as posturing, know-it-all, aging-hipster bullshit.

The musical portions make it almost worth it. The tunes performed by Dylan and his four-man band are pure uplift, and there's a beautiful interlude when a nine or ten year-old girl sings "The Times They Are A Changin'" a capella that stops the film in its tracks.

It's really a movie about watching Dylan being Dylan, and if you're a big enough fan, it's conceivable the film might not feel like a total burn. Sony Classics, which acquired it for distribution only recently, is apparently of this opinion.

The problem is that Dylan the performer is such a minimalist, taciturn, hidden-away type (a quality he brought to his other two acting-role films, PAT GARRETT AND BILLY THE KID and HEARTS OF FIRE) that he seems to be almost trying to keep our interest in him to an absolute minimum. He won't smile or get angry or give anything up at all, except when he's singing and playing guitar. Angela Basset tries snuggling up to him at one point and planting a kiss, but Dylan is unmovable---she may as well be kissing a saxophone. When that little girl finishes her beautiful rendition of Dylan's seminal anthem, he just looks at her coolly and circumspectly, when a more emotive response would be to hug her or at least invite her to perform during the concert.

Dylan was a little more forthcoming when NEW YORK columnist Anne Thompson, the CHICAGO TRIBUNE's Mark Caro and I shared some face-time with him at Lakota, but only a little. He was pleasant but guarded. Whatever the topic, he was fairly laconic.

He asked us at one point how the film seemed to go over with the crowd, and we all hesitated and exhibited the usual body gestures that indicate emotional discomfort. I asked him if he's seen any films recently that have really hit the mark for him, and he said no. He doesn't own a DVD player but says he'd like to. I mentioned I'd seen and enjoyed a documentary about his old mentor, Ramblin' Jack Elliott, at the festival a couple of years ago, and he said someone else had brought this up also. The energy died at this point, probably because Dylan isn't all that keen to discuss his once-troubled relationship with Elliott.

Anne seemed to hit it off a little better with him than Mark or myself, but I was too excited about just speaking with the guy to care that much. It definitely made my night.  ##

He asked us at one point how the film seemed to go over with the crowd, and we all hesitated and exhibited the usual body gestures that indicate emotional discomfort.  ##

Music legend Bob Dylan got a standing ovation before the screening of his movie "Masked and Anonymous" Wednesday night. After the movie, Dylan was gone---and, after seeing the head-scratcher of a movie, so was the audience's unanimous good will. Set in a dystopian, totalitarian America, the movie centers on a faded rock star, Jack Fate (played by Dylan),
coerced by a blowhard impresario (John Goodman) into playing a benefit concert on state-run TV. The cast includes Penelope Cruz, Jessica Lange, Val Kilmer, Mickey Rourke, Luke Wilson and Christian Slater---all of whom were in attendance. The inside joke of "Masked and Anonymous" is that, though credited to "Sergei Petrov and Rene Fontaine," the movie was penned by Dylan himself. "We don't talk about the writing of this movie," said director Larry Charles ("Curb Your Enthusiasm") in the post-screening Q-and-A. Lange, however, gave the game away. When asked why she signed on for the film, she said, "Who wouldn't want to
work with these actors and speak words that Bob Dylan wrote?"   ##

That will take you to the website. You'll see pics of the actors. Under will be the reviews. They are all there. Ebert's and another one called "It's been a hard reign" are excellent. The later comments on how ill he looks. Christ did you see the picture I sent? He's the original "dead man walking." If you have any trouble get
back to me and I'll send them to you individually.

BTW Caught The Stones here Sat. night. Great fucking show. They don't look so good either but still got the energy. The Stones and Paul McCartney's concert here a couple of months ago were dead on. Especially Paul since he doesn't come by but once every twenty years.

PARK CITY, Utah---"Do you consider yourself a photographer?" asked Tom Bernard. He is the co-honcho of Sony Classics. I held up my camera and shrugged."Good," he said, "Dylan wants a photographer backstage right now. Come with me. "This is like hearing that George Bush wants to meet a liberal.............   ##

The thing that comes across is his lack of generosity. If the party is in your honor, you should make an effort to have a good time. Dylan seems to be appearing as a favor..............  ##

BOB Dylan is as low-maintenance as a rock star gets. When the gravel-voiced legend goes on tour, he doesn't demand that his dressing room be stocked with green M&Ms and enough booze for a crew of 20. The list of backstage requirements for his current tour consists of just a few basics, including hot and cold running water and a toilet. Dylan also requests clean towels, a bar of soap, a full-length mirror, a banquet table, two ashtrays and "incandescent" lighting, reports the Melbourne Herald-Sun.  ##