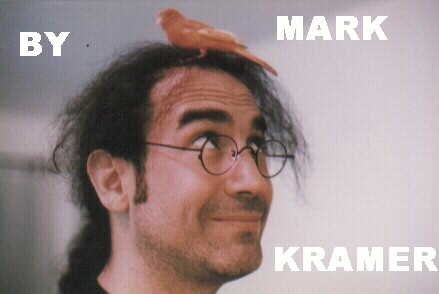 Once upon a time, donors from around the globe converged upon these shimmering streets of shame, infusing their essence into the dazzling array of subterranean spuzzworks that churned below. In humid, bleach-scented scumatoria, sump-drains gurgled night and day with gazillions of plasmic polliwogs, sluicing down Teflon spillways into a vast complex where the neon never shined. Like salmon returning to their spawning grounds, each particle of raw glandular exudate bore its own minute catabolic cargo, converted into steam by heat extractors driving the turbines and centrifuges that processed the soupy lipid into its many industrial and commercial applications.

?A single squirt replicates the work of eons?, theorizes Wendell "Buddy? Boothe, visiting lecturer on spermodynamics at Audrey Cohen College. "Because the metabolic origin of semen is little more than an acceleration of the way that conventional fossil fuels and some fermented soy products were created.?

?It offers all the advantages of petroleum and coal with none of their noxious, ecologically unsound emissions.?

Cheaper than cow manure, richer in methane than chicken droppings, safer than bat guano, less capital-intensive than photovoltaics, and quieter than most windmills, free-range semen breaks down into a motile, cruelty-free emulsion of proteins, secondary metabolites, free radicals, endocannabinoids and a tofuti-like substance that tastes like halvah.

Fantasizing about
other uses
for the seed of life

perplexing properties and promising possibilities of semen were first discovered in 1973, when Osbaldo "Kotex? Mendoza, the night floorman at Mickey Zaffarano's PinkPussycat Cinema, observed that under certain conditions, puddles of the viscous discharge could be induced to mop themselves up.?

Noted a June 1975 Letter to the Editor of Waste Week, written by Mendoza shortly before his disappearance, 'the singularly self-mobile properties of this ambergris-like substance can be harnessed for such simple tasks as pulling a tiny buggy and sorting peas....?

Although years would pass before Mendoza's dentures were recovered from the Schuylkill River by a Philadelphia fly fisherman, adult-entertainment impresarios were not slow in rising to the challenge of erectoplasmic nanotechnology.  Awaiting modern masturbators not only in Times Square but in semen-rich tenderloins throughout the land were such innovations as the auto-rejaculator?utilizing both dribble and gravitational torque?and the coin-operated prostatic interface, in which penile trajectory potentiated the flagellate velocity itself.

It was only when apartheid collapsed?and Peepland's tokens replaced the Krugerand as the world's most stable currency'that transnational petroleum- and nuclear-power cartels struck preemptively against the barbarian at their gates.

Extravagantly paid lobbyists fanned out along the Beltway and haunted the Congressional cloakroom'their mission to keep the paradigm-shifting benefits of semen off the national agenda. Refractory legislators soon found themselves being branded not only as "pro-pornography? but "anti-Disney".

And in the name of 'redevelopment?, one peep emporium after another was padlocked in a frenzy of official intolerance. Before long the engines beneath Times Square had ground to a halt. Refineries ran dry and southbound tanker trucks no longer idled in the 42nd Street dawn. And in one of 1996's most underreported mysteries, the ruggedly buttery  fitters and jizz-monkeys known as  "glandhogs??half-blind from three decades beneath The Deuce, where they manned the now-silent transducers and rotators?perished in the dead of a cold winter night when their flophouse was illegally imploded.

Giuliani Time had clearly come and gone?dropping the curtain once and for all upon America's last hormonal heartland.  ##