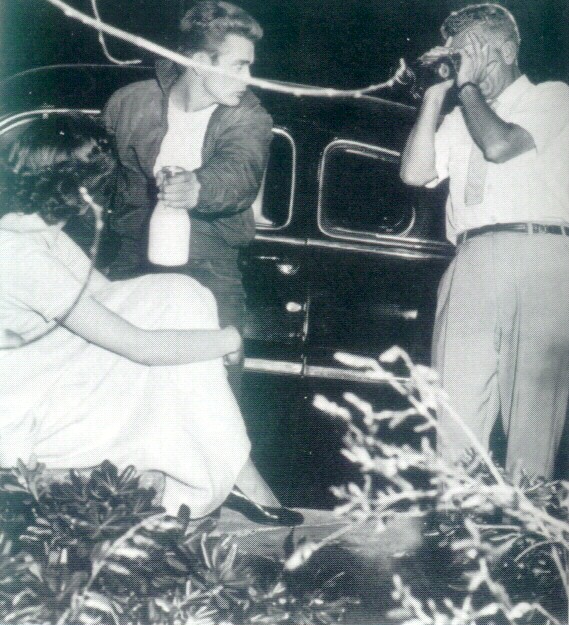 NICHOLAS RAY DIRECTING NATALIE WOOD AND JAMES DEAN DURING THE FILMING OF REBEL WITHOUT A CAUSE.

By the mid-1970s, a psychic avalanche had trapped me in a tomb of woes. I was as good as exiled to the Devil's Island of the mind from which I'm still in the process of escaping. I was pretty glum.

A petty-minded dinosaur, the executive editor of the New York Post had violated the union contract by firing me for no other reason than that his ego was bruised by the tremendous success of my Pop Scene column. As for the lame excuse for a union, the American Newspaper Guild had promptly sold me down the river. As for my so-called "colleagues? at the Post, they had swallowed the executive editor's poison about me without ever bothering to look at the label on the bottle and they had stripped me of the pension into which I had sacked away so much of my pay. By then, the stable of the music management company I'd started in 1964 had been emptied by rustlers such as Andy Warhol. And my pioneering attempt to introduce live country music to Manhattan with my Country in New York concert series in Madison Square Garden had gone broke. As if that weren't enough, the delicious ex-hooker girlfriend of Norman Mailer who'd moved into my bed four-and-a-half years earlier after the 1972 death of my wife had just run out on me.

Raising a family with my wife was the happiest time of my life. How could I continue raising our three young kids without her? That's when I became reunited with Norman's ex-hooker girlfriend. After her short stint with Norman, she?d married Paul Krassner. By the time she came to me, she had two kids of her own and I'd thought we could all live together as a Brady Bunch. Besides, she?d given me sex that I never knew existed. Now, not only had she run out on me, but my long-time buddy, Allen Ginsberg, who'd once kept twisting my arm to write about him, told me:

I?d lost my collection of cultural giants and I was now hanging out with mostly dope-dealer friends. Like I say, I was pretty glum. That's when one of my dope-dealer friends introduced me to Nicholas Ray. He was a giant! He was the Hollywood genius who'd directed a string of unforgettable movies, including Rebel Without A Cause, the film classic that'd turned James Dean into an icon.

I was proud to hang out with Nick. Except, he was pretty glum, too. I was maybe 47 and the

We did
a lot of blow
together

white-haired Nick was well into his senior citizenship. We found we had a lot in common. In the first place, he was as destroyed as I was.  His younger girlfriend had just walked out on him, too. He was still a brilliant and talented guy, but he had turned into a drunk. Me, I'd never loved alcohol too much, but I'd join Nick in a drink or two just to be sociable. We also did a lot of blow together.

So we're at this bar in the West Village one day, both of us glum as hell, depressed out of our minds. And I'm feeling so desperate, I blurt out:

"You been around, Nick. You survived this long. You had all kinds of experiences I could never have. Tell me something I should know. Give me some words of wisdom about life!?

"Y?know,? he says, bleary-eyed as he looks up from his drink. 'there was a young brilliant student, sort of a genius himself, who once wanted to know the same thing. He traveled the world, visiting all the great founts of wisdom---the Einsteins, the Platos, the Aristotles of his time---whoever had a reputation for being one of the great founts of wisdom. And he'd ask, "Please give me some words of wisdom about life."

"And they each gave him some words of wisdom, but nothin? any of?m said satisfied the brilliant student. So, he keeps travelin? and he finds himself in Egypt in front of the Sphinx. And he muses aloud: "O, Sphinx, I know you can't talk. But if you could, I'd ask you to give me some words of wisdom about life."