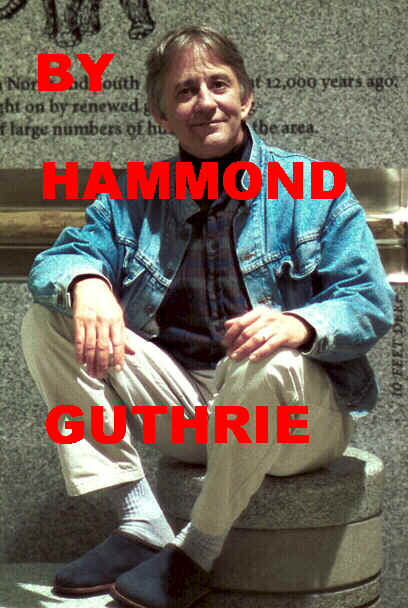 [Hammond Guthrie says he got his start in what he calls the 'submerged community? when he collaborated with a number of luminaries, including, he says, Del Close, director for 2nd City and The Committee; "Hube the Cube? Leslie; Philo T. Farnsworth III, son of the inventor of television; Liam O'Gallagher; author of The Blue Planet Notebooks; William Seward Burroughs; John "Hoppy? Hopkins of the Arts Lab in London, and Robert Jasper Grootveld, mentor for the Amsterdam Provos.

In the Fall of 2002 SAF Publications in London will release Guthrie's first book of memoirs AsEverWas - Memoirs of a Beat Survivor.]

With the July 2000 Grove Press release of The Beat Hotel, author (Barry) Miles revisits 9 rue Git-le-Coeur, an historic set of decaying digs amid a rat infested slum on the Left Bank of Paris, "a decrepit rooming house with hole-in-the-floor toilets shared by all..." circa 1957-1963. A spectral time in diminutive spaces where life's more literate mysteries were eloquently explored with improvisation, magical intent, opiate indulgence and---to paraphrase the late Erato Gregory---"by waiting for no one."

This is where Burroughs spoon-finished the pages of his Naked Lunch, where Ginsberg first began howling Kaddish for his mother Naomi, and where Corso penned The American Express, his first and only novel. It was from this essential base of operations that Gysin and Sommerville's stroboscopic Dreamachine and the initial cut/up texts in Minutes To Go were released upon the hearts and minds of the relatively small underculture of like-minded writers and artists who were listening---"Towers Open Fire!," they screamed from the balcons. And, it was here, in this perfectly dank hovel of plastered stone that the close-cut fragments of the era referred to as "Beat" made its final call from subterrania.

Miles' Beat Hotel well remembers this proclamation, and le raison' du "Here To Go" for today's audience of time's beaten past with a sensitive pen and intimate knowledge of the players therein shared by few. What an astonishing array of form and set-founding artists passed, and rather quietly I might add, through these instrumental doors of perceptive experimentation.

When one reads Miles' engrossing account of this communal and highly individual period of wood-shedding within the slums and back streets of Paris, reflect back upon the far better known, and completely infamous, paregoric a la Arab boy den of indulgence that Burroughs had previously established in Tangier as the Beat-beach and redoubt du jour---where the uniquely creative, truly word-breaking, and highly influential camaraderie among this same group of friends pales like ash blowing across the graves of unsung heroes.

Apart from the few existing works published by Mary Beach and the few other limited editions that appeared during this residency---the transient doings and the experimental results formulated by the hotel's renowned inhabitants have remained little more than an out of focus image---even for those of us who weren't on the set---yet heard the echoing resolve from points unknown.

A close friend to so many of these prolific and well-respected artists, Miles' superbly illustrated book pedagogically and humorously fills what has, up until now, been something of a black hole in Beat history. For artists, students and friends of the Beat Generation, The Beat Hotel is an essential read.

Other works by (Barry) Miles:

1970 - The Rebirth of Joy by Miles, a mimeo edition of the article
that Peter Owen left out of Joe Berke's Counter Culture. [1970]

1973 - A Catalogue of the William S. Burroughs Archive. Ollon, Switzerland
and London, Am Here Books and the Covent Garden Press.

1969. Chronicle Books. San Francisco, in association with the Rock and
Roll Hall of Fame and Museum.

CLICK HERE TO GET TO INDEX OF COLUMN SEVENTY-FIVE