MY DAY WITH HEATHER 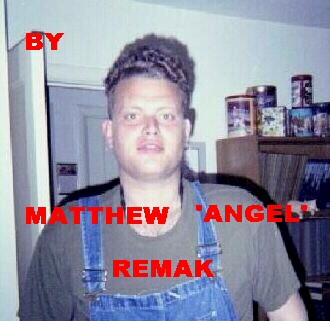 Me and Heather were hanging around one day starving. It was February or maybe March and we were starving. Heather was pregnant, 23 years old and working on methadone, crack, and pill baby number 3. It's fuckin' cold out, and drizzling, but she works the streets anyway peddling that skanky ass of hers.

There's a Catholic church on the next block, they give out bologna sandwiches and generic warm lemon-lime sodas.

"Hey Heather, ya wanna earn your keep? Come to the Catholic church with me."

After all, it ain't my skanky broad or unborn fetus, and what am I? A charity organization?

She puts her flabby white ass with red zits into some ripped panty hose and a wool skirt that shows off the merchandise and hobbles out to the street with me like some retarded girl in high heels playing dress up. She's on so much Elavil, methadone, and Xanax that you expect her to fall on her face any second, she often does.

We go to the door on the side of the church, it's a cold gray Jersey City day, and it's a weekday. All the Puerto Ricans, Dominicans,and the last few surviving Irish of the neighborhood are at their jobs as security guards, forklift ops, fry cooks and video store clerks, while me, the intelligent white boy from the West Coast can't hold a job more than a week. When I come in so high, I sing songs and giggle like a schoolgirl, or when I have hatchet marks on my face from what I call "falling down," it arises suspicion.

We're at the door. The parish priest is an old Puerto Rican who speaks English with a resentful tone, as if the language itself is as immoral as this whimsical, decadent culture he's lowered himself into--but only to save the pitiful sinning wretches, of course.

He regards me and Heather through his thick black glasses with all the judgment and contempt the lord surely has for us. His muscular--coulda been a streetfighter but instead I fight for Christ--arms crossed as he barely contains his contempt which seems to border on violence.

"Naw man but I'm looking," I say, as an indifferent middle aged woman hands me and Heather

each a crumpled brown bag with the bologna on white bread sandwiches and a warm Hansen's lemon lime soda in the can.

"I tot ju are a stockbroker? Why ju no fine yob?" demands the priest.

I reply, not realizing just how high I am today, until I slur out: "Uh, the market went down, Father...."

He winces and rolls his eyes.

"Hey look, father, this is my girlfriend and she's pregnant!" I say, motioning at Heather, as she clutches her bag and soda struggling not to drop it with eyes almost completely shut as if she's asleep standing up.

We both regard her like a stray dog with mange, me wide eyed and seeking pity, the father with disgust.

Now this is some crap that really blows his holiness' mind! I mean tons of his fellow Catholic Ricans do the same thing but at least THEY don't TALK about it! I mean being in a local gang, dealing dope, having 10 illegitimate kids that he can understand as long as you don't talk about it, and you're brown because then it's because your poor and Latin and Catholic and oppressed, and NEVER stoop to getting a FREE SANDWICH!

That's for those dirty blancos they SELL the shit to!

"Yeah, Father man? Can we get another sandwich and soda since she's pregnant? SHE needs it, y'know?!?"

"Ah, an you da father?!?" he says, not even trying to conceal his contempt for these dirty white folks.

He just throws up his hands, let's out a "Hhrrumph!!!" and, as if telepathically getting permission, the volunteer woman indifferently gives me another sandwich and generic soda not even looking at my face, as they both now seem to have some sort of awareness that Heather in her stupor does not give a shit about the sandwiches, and is so out of it she barely knows where we are and why we're here.

The Father says as we stumble away: "Ju go an' get a yob!"

I, half grinning, nod at him, he knows it's all a con but he's not sure how exactly.

Three feet from the half-opened Dutch door, Heather thrusts the crumpled bag with one bologna on white bread sandwich and some stale Oreos into my hands as she clacks, and staggers on her high heels. I don't look back but they must have seen, and I can just hear the priest say to himself "Ju goin' a hell!"

And I feel rich with my three bags of bologna sandwiches and stale Oreos and my three warm lemon-lime sodas as we trudge across the parking lot with its patches of filthy black snow and we pass some local winos going to church for their breakfast of champions.

Me and the priest both know that that's what sympathy gets you.

With the realization that three bologna sandwiches is not all that great of a victory, I steal some Elavil out of Heather's stash to turn out all the lights in my head. But they don't kick in immediately. Heather took off her ripped panty hose and wool skirt and is passed out on the couch in her dingy panties, legs spread to reveal a faded brick red period stain.

For some reason the pure depravity and filth of the situation turns me on.

I lay on the couch with her and with great difficulty from her state of rigor mortis I touch her pale, prematurely saggy tits with one hand and fondle her loose pussy with the other. I'm in jeans but I can't resist rubbing my dick through the denim onto her mushy ass. She mumbles incoherently, eyes closed as I invade, but don't penetrate. I get a grinding rhythm going against this bounceless marshmallow of a rump, and get a slight perverted thrill out of molesting this piece of sexual trash. It's the sexual equivalent of finding leftovers in the garbage and eating them, but that turns me on even more!

Then after feeling the friction for a while I start to think of ways to get in and then I catch myself and am suddenly revolted by my own thoughts and I quickly jump up and my cock retreats inside my nutsack and I pray she was oblivious--which she was--and won't remember--which she doesn't.

By now my Elavil has kicked in and I pass out in my own bed, it's 2pm, the day is done and boy did it have it's fill of sex drugs and rock n' roll and fine cuisine and in an exotic locale to boot!

I literally hit the bed face first before I can climb in, the classic result of Elavil and methadone.  ##

CLICK HERE TO GET TO INDEX OF COLUMN SEVENTY-THREE