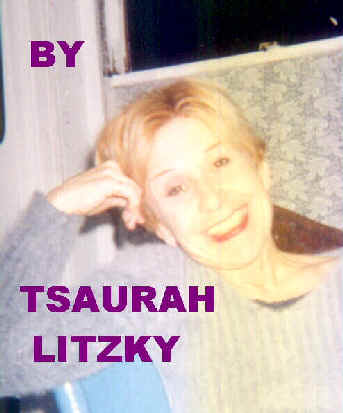 WARNING!  FOR ADULTS ONLY!  PERSONS UNDER 18 YEARS OF AGE ARE NOT ALLOWED TO READ THIS STORY.

[Tsaurah Litzky is a poet and writer of fiction, non fiction and erotica. Her work has appeared in Best American Erotica 95, 97, 99, 2001 and will be included in BAE 2002. She has also been published in Penthouse, LONGSHOT, The Unbearables, Crimes of the Beats, Appearances, Downtown Poets, The Outlaw Bible of American Poetry, Pink Pages, Beet and many other books and periodicals. Her poetry books include Kamikaze Lover (Appearances 1999) and the just published Good Bye Beautiful Mother (Low Tech Press 2001). Formerly a columnist for the now defunct New York arts weekly Downtown, she now teaches erotic writing and literature at the New School University.

In Union Square after the tragedy, thousands of people are trying to dispel the darkness, lighting candles, clasping hands, singing Give Peace A Chance while the devil does the tarantella through the heavens, holding the earth in his hand like a giant orange. At any second he may pop it into his mouth and grind all our unfinished lives into bloody pulp.

Although I believe the words of the Hindu sage Marahanda---'to kill one is to kill ten thousand?---my gut is screaming an eye for an eye, a tooth for a tooth, get Osama and his hellions, decimate the Mujadhin.

When I tell my Catholic friend Mary this she says I feel this way because I am Jewish, part of an ancient, primitive tribe. She says it is more evolved to turn the other cheek, there is nothing more evolved than world peace.

I get furious at her and yell, "When have the Catholics ever given the world peace, what about, the inquisition, what about the popes who believe that women don't have the right to control their bodies??

She laughs, "Yes, Einstein," she says, 'the father of the atomic bomb."

"What about Ghandi?? I scream. "Don't you know that Ghandi was really Jewish??

She tells me I am insane and she is right I AM insane. Whether my eyes are shut tight or open wide I see, running over and over in my head, the news clip of the people jumping out of the windows of the WTC, their bodies falling like ticker-tape.

I go down to Maryland to spend Yom Kippur with my father. I sit in the auditorium of the JFK high school among a thousand, well scrubbed, earnest Jews dressed in their holiday best.  These Jews are not from my ancient tribe, they believe in the rule of law---the Torah, the book of laws. With the rabbi they bow their heads in a silent prayer for peace.

I hold my head high, savage in my nose ring and designer knock-offs from H&M and think that all I believe in is sex and death. Yet during Kol Nidre, the whisper of wings, I find myself reaching for my father's hand.

I stop my preparations for Class 2--?'the Petunia and the Pussy?---Erotic Language, and decide I have to practice what I preach. I call up a man I have just started to date but have not yet slept with. He is as battered as I am but also, astonishingly, unbroken. I tell him I have to come over right away.

When I get over there, I stand in front of him as he sits down on the couch and I slowly take off my clothes. He seems startled and lights a cigarette but then he gets into it. He puts the cigarette down into an ashtray and unzips his fly. He takes his cock out. I like it. It is solid, thick with desire, upstanding, a tree of life. He reaches his fingers up and pulls me down onto him by my nipples.

He has a dog named Abraham Lincoln he has locked in his darkroom because I am allergic. Still, at the moment of penetration I feel that itching sensation all over my face that means I am breaking out in hives. But I don't let this interrupt our ride. I concentrate on the heat between us, the building, cleansing fire.

The Midrash says to search for the sudden light that lights up the heart. I do not know about the future of the earth, I do not know if this sorrow can ever be healed but at least for this little while I have found what I was hoping for. There is still miracle and wonder, this is the day of awe?    ##