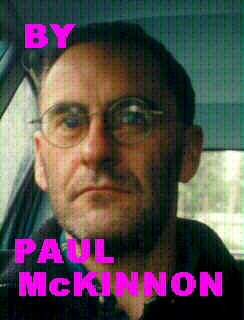 There's nothing quite like a High School Reunion to kick start a mid-life
crisis.

Not that I needed much help.

Since the sudden, ugly death of a friend of mine last November I've been
doing the "what-does-it-all-mean-and-what-have-I-done-with-my-life?"
mental shuffle.

So I've come back to my hometown, dropped my five year old daughter off at
my Mom's place, and have headed out to STRAIGHTON HALL with my old High
School buddy Lou.

We get lost on the way there.

It's a narrow mountain road, and the ground mist is starting to roll in,
obscuring the surroundings. And we don't really know where we are.

Jesus, I think to myself, this trip is turning into the Blair Witch
Project.

Somehow we manage to get to the hall.

There are about a hundred grads from Abbotsford Senior Secondary's CLASS
OF '75 here tonight- most of whom I haven't seen or spoken to in 25 years.

Father Time and Mother Calorie have taken their toll...but most of us
don't look too bad. (In fact, some of the women are downright HOT!)

What I find most interesting, however, is not who's here, but who's NOT
here- and why. I'm more curious about the critical lists than the success
stories.

Bonnie James, for example, (and all these names have been changed by the
way- except Lou's), Bonnie James has apparently gone nuts.

"Her whole family's crazy," someone says, "it was only a matter of time."

Brian Clark is also conspicuous by his absence, and may or may not still
be dealing with the recent death of his younger brother Gary. Once again
I hear the horror story of Gary's drug-induced car accident, in which he
drove his speeding vehicle into, and then under, a stationary
semi-trailer.

Also on the missing list is the one guy both Lou and I were hoping would
show up- Neal Knox. With Knox around we knew there'd be a party.

"Neal's got Parkinson's" Larry Azusa informs us, as he sparks up a joint
in the parking lot.

As we pass the dope back & forth Larry proceeds to tell us a bizarre tale
of how Neal's disease was somehow brought on when he was hit by a
truck,and now he's just been handed a mulit-million dollar settlement from
and insurance company.

I have no way to confirm this story.

I'm getting a little stoned here.

I'm also getting a little bummed out man.

I decide to head back inside.

But the worst is yet to come.

Bummed out but still buzzed I stumble back into the hall, and heads to the bar.

Hey...isn't that Claire Ravel? One of my many highschool crushes? My God-
she's still HOT! I better go over and say hello.

"Guess you're hanging in there?? Jesus, Claire, is that the best you can
do tonight? You make it sound like you've got CANCER or something."

And as soon as the words leave my mouth I know what she's going to tell
me next.

Claire Ravel DOES have cancer.

She was diagnosed last week.

"But they think it's benign."

She starts radiation treatments next month.

Someone please shoot me- shoot me NOW!

Back in the land of the living I ask Bobby Bellpharo if he's still got
that scar.

You see back in elementary school Bobby Bellpharo was involved in a freak
accident when a lawn mower spit a small stone half way across the baseball
diamond---the rock caught Bobby half an inch below his right eye.

He's still got the scar.

"Here," he says, grabbing my hand, and placing it up to the scar, "press
your finger right here."

He's got a fucking DENT in his face.

"You know," Larry Azusa says, "if that had happened today instead of
thirty-five years ago you could have sued their ass!"

"Yeah," Bobby Bellpharo says, "I'd be a goddamn millionare."

Later that night Lou and I are heading out to his car when we see Bobby
Bellpharo sitting on the back steps with his head in his hands.

Bellpharo lifts his head up- his eyes wide and filled with panic.

"Oh man," he moans, "I don't know what was in that joint that Larry Azusa
gave me besides weed, but I'm RACING here...my heart's going a mile a
minute I'm telling ya...ho-boy."

Bobby Bellpharo is 43 years old and built like a five and a half foot
tall refrigerator---he doesn't really need his heart to be pounding like a
sledgehammer in late July. He's having a hard time coming down, and he's
more than a little fucked up.

We offer to drive him back to his Mom's place, where he's staying for the
weekend. We somehow manage to get him into the car.

Bobby is our navigator.

And it isn't long before we don't really know where we are.

Somehow we manage to find ourselves on Old Yale Road.

It's some kinda Highschool Flashback here, and I figure that perhaps The
Roadblock is somehow part of the Reunion Package. But then again- I'm
stoned.

Bobby is still coming down.

Lou is at the wheel, and when asked by the Police if he's been drinking
this evening he says what he always says:

This is what the Police want to hear.

They wave us through.

By the time we drop Bobby off at his Mom's place he's looking a little
better.

He thanks us and we say goodnight.

I have visions of him dying in his sleep. Choking on his own vomit or
something. His mother finding him in the morning. Lou and I the last two
people to see him alive.

The next night is Part Two of the Reunion.

It's a dance held at Matsqui Hall. That's half a block from where Lou
used to live, so we don't get lost this time.

There's Bobby Bellpharo with a beer in his hand.

You can't keep a good refrigerator down.

"He Lives!" I cry out, and toast his health.

But Larry Azusa is there.

Before the end of the night he's dancing with a chair.

And they all lived happily ever after.