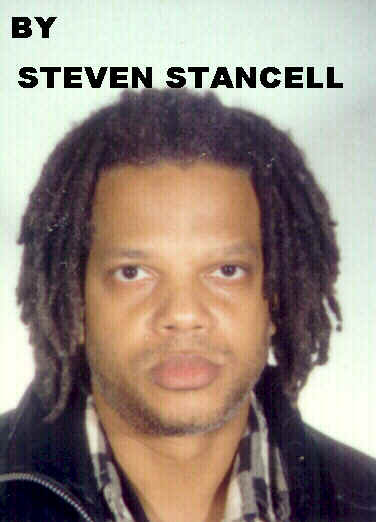 [Parts of this interview were scheduled for Vibe Magazine, while other parts appeared in variation in the New York Beacon, in Steven Stancell's Alternative Discs column. Stancell authored the first biographical encyclopedia on rap music in 1996, Rap Whoz Who, which received a Ralph J. Gleason Music Book Award nomination. Stancell's earlier literary pieces have appeared on WBAI-FM's Radio Unnameable with Bob Fass, and his play, Neighborhood Disrupted, was produced by the American Theater of Actors in 1984. He is also a multi-genre musician and record producer, responsible for artist Shaman's 1985 single, This Is Not A Jungle, This Is A Zoo, which he co-produced with recording artist Strafe, of Set It Off fame.]

Talk about stupid---and I once heard the Rolling Stones' Keith Richards say the same thing. And what is that? The fact that age shouldn't really mean a thing when it comes to a rock & roll artist. Folks were pissing him off with questions centering on, "How do you answer critics who say that you're a little too old to be rocking and rolling?" This, Richards would answer with a claim that these questions were, in fact, racist. Nobody ever asks John Lee Hooker or B.B. King these questions, he'd say. Hallelujah!

So I second that and say, what about producing? Age shouldn't have anything to do with that either! Especially when it comes to a legend, as in Dave Bartholomew. Here's a guy that co-wrote and produced some of the greatest rock & roll records of all time, by the great Fats Domino: Ain't That A Shame, I'm Walkin', Blueberry Hill and others. He did Shirley and Lee's Let the Good Times Roll, Lloyd Price's Lawdy Miss Clawdy and a whole lot more.

Bartholomew told me, "I been in the business since December 1949. The first day me and Fats went into Imperial Records (where he was house producer) we cut a two-million seller, called The Fat Man. The things we did many years ago are still prevalent today. I go all over the country and hear our music played by all these different groups. Been all over Europe for the last 40 years. You know, we (him and Fats) been in the business for a long time, although Fats is semi-retired now."

Yeah, but Bartholomew ain't. When I heard his latest work, this New Orleans Big Beat CD, the vibrancy and musicianship comes through that range of music genres he presents to us there, and with the same proficiency as always.

"I'm now coming up in the rap world," Bartholomew declared, "and I don't fool with the computer at all. So technically, I'm an unknown. Older people'll say, 'Yeah, his records are good,' but they don't buy no goddamn records!

"What I'm trying to say is this: you can have a hit record out now, and it can last for three or four months, and after that they want another one. They're always like, Okay, what else you got? But me and Fats haven't recorded in the last 25 or 30 years. We went our separate ways about 12, 15 years ago."

I asked him about those history making days he was recording, where every record he did with Fats from the 1950s to 1963 were big, big hits (they sold 800 million records to date!). "I was discovered in Houston, Texas, by the late Lew Chudd (owner of Imperial Records). I worked there in Texas for Don Robey (black record mogul, owner of the mostly gospel Peacock Records label, which released the original Hound Dog by Big Mama Thornton. I was working at Robey's club, not his record company."

Bartholomew said that in the technical sense, "we didn't actually write songs, Fats and I. The tunes we came up with, we got those together by sitting around jamming and doing little things like that. We didn't do like some guys. We got together with an idea, and put it together like that. Ninety percent of them were done like that.

"I always worked for the record companies, so I didn't own Imperial Records, and Fats and I didn't own any of the publishing. But we were blessed that EMI bought the catalogue. Lew Chudd always paid me a salary. He would hold back on the zeroes though, but I worked for Lew and he gave me a break. I think I should've been cut in more than I was. He paid me decent, but I started with him."

Now if you're an aspiring recording artist reading that, and you go "aww" with a tinge of disappointment, and think that that's how it was in those days, think again! The same thing goes on today. Record label heads always consider that they're giving you, the artist, a break when they sign you to a deal. Call it serfs and feudal lords if you must. ##

CLICK HERE TO GET TO INDEX OF COLUMN FORTY-ONE