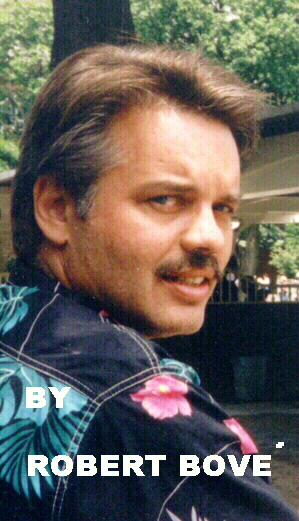 This story first appeared in June 1996 in GRIST On-Line ( http://www.thing.net/~grist ) of which Robert Bové is contributing editor. Robert Bové has worked as a cattle-farm caretaker in West Virginia, a canvasser for Oregon Fair Share in Portland, a stage carpenter's apprentice Local 1 of the New York Stagehands Union and as a journalist and editor in Washington, DC. Editor of Room Temperature on-line, he has written poetry chapbooks that include Ninefrom Metronome (New York: Pisces Press) and Nectar (San Francisco: The Norton Coker Press). He was educated at The University of Virginia, Charlottesville and at Brooklyn College, CUNY. While studying at BC, he was the editor of Brooklyn Review #15, and currently teaches writing there and at Pace University.

We have to buy some things at the central market. We drive there in Phoebe's car, but instead of buying things at the sparsely stocked stalls, Phoebe, an ex-policeman's daughter and my ex-student, takes me to police headquarters, which is in the middle of the central market, and asks me to wait in the hallway with the screaming women with silver teeth.

A little while later, a big policeman pushes out the door Phoebe had gone into and elbows his way through the crowd, followed by Phoebe, who is carrying two large brown bags. One contains boxes of Tide peaking over its top; the other with something else. The screaming intensifies once the women see the bags.

Back in Phoebe's tiny car, I notice the stench of fried fish and eye the second bag suspiciously. She notices I've noticed and says, "Not for birthday. For family." From under her winter coat she pulls out two bottles of pricey Cricova wine.

Later that afternoon, after we've dropped off fish and detergent, we drive to the party house. After greeting the middle-aged couple throwing the party for their son, I am left in the piano room with the birthday boy, who speaks English he first learned from contents panels on cereal boxes. The chemical names, in particular, having Latin roots, are a piece of cake for this ethnic Russian kid who speaks Rumanian as a second language. But I don't like the way he says "corn syrup," imagining myself ending up on someone's breakfast table, in

The famous
'Red Fish Dish'
that's been raved about for days

the newspaper, as the gifti American girl kidnapped and presented to a 21-year-old engineering student with ambitions to work "Upstate New York on big project."

I don a mask expressing coy ignorance of all things foreign and don't take his bait. We all sit down to the famous "Red Fish Dish" Phoebe's been raving about for several days. The hostess majestically serves it from a huge silver dish: gray fish parts, white fish parts. Mostly gray. Mayonnaise turning in slow motion from yellow to brown. Graying greens listlessly swimming in a turbid brown sauce. I tell my stomach to see it as a difficult yet intriguing exhibit of post-communist sculpture. Served to wash it down, thank God, are bottles of homemade golden wine in forest green bottles. And the wine does its job: I grow warm to the trilingual conversation, leisurely gaze, through diningroom's cigarette-smoke-stained windows, at snow, falling.

During the jarring ride home on the cratered Chisinau road, which produces a pre-hangover of Bukowski proportions, I reassure myself with a vision of ibuprofin waiting for me, laid out like white M&M's on my bed table.

As I get out of the car, I ask Phoebe if she thinks our hosts enjoyed our company. Phoebe asks me if I'd noticed our hosts didn't open the wine we brought. I hadn't noticed. It's possible we insulted them, she says, proud as they were of their home made brew. An even trade for the Red Fish Dish, if you ask me. ##

CLICK HERE TO GET TO INDEX OF COLUMN FORTY-ONE