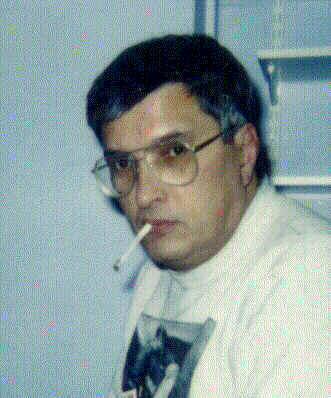 To continue with Manuel's email:

Received and read with pleasure column 34? I think it was. The first part didn't appeal much to me, there was plenty meat in that sausage but little garlic. It only showed me the great black holes in my musical and poetic knowledge.

But the account of your trip to the "Grateful Dead" concert was great, the best of your stuff I ever read. It seemed to me I was there and seeing everything through my own eyes. It left on me a great melancholy: I have never taken acid, I've never listened to the Dead, I've never been to a rock concert, and I don't even know how to drive. But nevertheless it was like enjoying all your experiences vicariously.

As for my job, something would turn on eventually. I'm sending another e-mail, sort of a circular, where I explain my options, and my wishes. Have to go to work tonight at midnight, I need the overtime. I'll write more next week.

First thing, sorry because today I sent by mistake an old e-mail, and in the process erased the new one, so I'm writing it again; this is sort of a circular for my handful of friends, namely, yourself, Joy, José Luis and Mr. Al, my surrogate father.

As I told you before, me and another 80 monitors are going to be wasted on June 30th. I just got the official letter. I don't worry too much, because fortunately this is not Spain, where they have had over 20% unemployment for a decade. There are always jobs here, good, bad or fair, although I doubt I'll find such a good one as this I just lost. It was a very good company, belonging to the Pearson Group. Owners of the Financial Times, The Economist, The Independent, Penguin Books, Madame Tussaud, etc. As we say in Cuba, nobody knows what he had until he loses it.

I have a lifesaver, though. I'm almost certain I'm going to win the United Nations "Cintas Fellowship" for Cuban writers in exile. It's ten grand US spread over a year. If I tighten my belt, perhaps I even could finish my novel, Iroko, and start writing my memoirs: Silence, Cunning and Exile. That's from Joyce, by the way.

So I'm not unduly worried. That is, if I do win the "Cintas" this year. I have high hopes, since I got behind me the weight of the Miami Herald's big guns: the CEO, Dave Lawrence, and Tom Schroder, the editor of Tropic, their Sunday magazine. The Herald is one of the most five influential newspapers in the States, and they both gave me incredibly good references. So my guess are 85% chances to win. And maybe this lay off is a blessing in disguise.

Just in case, for the last six weeks I've working from Monday to Sunday at full steam, trying to make as much overtime as possible.

This weekend I took a break: I was---am---too tired. Last Monday was Bank Holiday here, and they paid double time, so I put in all 25 hours working on a row. When I finished that marathon I was on the brink of a break-down.

I don't know anything about Cuba: I browse the Web, and I find always the same news: John Doe was arrested, Jane Doe harassed. No end in sight to the nightmare. I guess I was prophetical when I wrote Cuba Libre for the Herald in 1993. Which gained me the enmity of the professional patriots in Miami, that snake pit.

Well, take care, and do write: you and Mr. Al Aronowitz are my most faithful correspondents.

There's a guy on my soon finishing job that is putting together a magazine, and hard as I try I can't send him my stuff. I don't know what's going on. He also has Windows 95, with you at least I'm able to communicate. So edit off all accents, they don't matter really. What I meant is the only accent in Spanish, the acute. I get it pressing Option-e, and the vowel in question. And the Spanish "ñ", as in "compañero." Which I get by pressing Option-n, and then "n" again. But that's academic, don't worry about it.

What matters to me now is that I'm utterly depressed, to the extent that I ask for three days at this places, and spent them sleeping non-stop. It's not only depression, but anhedonia, a process more insidious. The word comes from the Greek, means a total impossibility to enjoy life. I feel plain, without interests, without emotions. I can't even read, because my mind wanders. I love the movies, and in the three last years I only went once, to see Titanic, and that because a friend practically dragged me there.

I'm empty, Mr. Al, I cannot write, I'm blocked, I have no juice, and no matter if I spent a whole hour in front of the blank screen.

CLICK HERE TO GET TO INDEX OF COLUMN FORTY