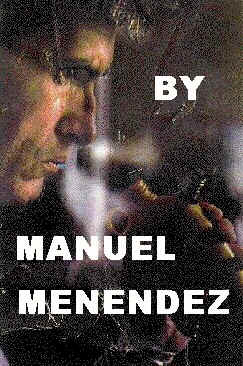 "Did you hear? Calabaza raffles the ass!" sniggered Skinny Escalante while he offered the first finishers a bucket of tepid water from the rusty 55 gallon drum.

"Ah, come on!" said Montero while he helped himself to the big sack of brown sugar, mixed himself a jar of sugared water, and drank the cloy lukewarm mixture in big, thirsty gulps. He was a swarthy guy from Camagüey, not tall but still strong despite our chronic hunger.

It was a Saturday's midday and the red, huge July sun burned you from the center of the sky as if you were a fried egg. Sweltering, not a breeze. They sat in the rutted earth path between the two cane fields. There were ten of them, five "dúos," or couples, crowded around the barrel. They had been the first in fulfilling the morning quota, a whole tajo, all 500 arrobas of twisted "Barbados 4362," the worst cane there is to cut. The rest of the brigade still toiled.

Jesus, but it was hot, the coarse blue denim shirts dripped sweat. No shadow anywhere but that of the drenched straw hats. Cintio and "La Pollona," queers from Cienfuegos who were compromiso, came treading through the yellow ocean of crackling dry leaves. Hand in hand, machetes on the others. Laughing.

"Aaah, fuck off---" said El Toto, while lighting a 15 cents cigar, puffing, amid a cloud of acrid smoke. Taut, wiry, intense; mad brown eyes---a paranoid schizophrenic out of a textbook.

"I sweeear it by la Caridad del Cobre! May I drop dead! He borrowed my ball point pen last night, and I asked him what for, and says he: 'For the tickets.' And I ask him, 'What tickets?' And he says he's raffling the ass tomorrow night, after the visit, when the guys are loaded."

"And how much would be a ticket?" asked, with ill concealed interest, "El Buldó," black pickpocket from the Coco Solo ghetto in Havana, Efi-Etete, but nevertheless a rapacious bugger.

"Well he tooold me a tin of condeeensed milk or four packages of Aromas. . ." Those were a brand of Virginia like cigarettes that the queers were partial to.

"Ah, the cunt. . ." Montero spat a mouthful of sugared water. "And to think that I defended him when them three black jockers from number Two barrack were going to screw him in the shower stall, and got myself three enemies, and now he goes and sells the ass like that---"

"Well, actually, he ain't selling it, but raffling it. Bet you the little prick is going to make a bundle out of it. . ." pointed out El Químico without irony, thoughtfully. "How many tickets were there?"

"Thaaat I don't know, but a bundle for sure. He was cutting this copybook in little squares with a razor blade like this, and wrote in one '13' and in the other one '13,' and put one to this side and the other to that side. . . About a hundred I'd say. . ."

"Shit, you know how many tins of milk and how many cartons of Aromas that is?"

The conversation ceased abruptly when we heard the distant engine noise. So did the guys in the cane field. Shouts from everywhere: "¡Po! ¡Po! ¡Po! ¡Matao el gallo!" They all came running with unexpected energy, and stood in line for lunch.

So came Master Sergeant Capote, "El Capirro," our brigade chief, a toothless Oriente Mulatto who sported a Colt .45 pistol with custom made butts depicting a Cuban flag. He had been taking a nap under a lonely nearby mango tree---no fruit left on it, eaten green by the hungry inmates. From the four corners of the cane field also came the guards on sentry duty, the M-52 rifles at their shoulders.

The Russian MTZ tractor hauling the yellow iron wagon turned the corner amid a cloud of red dust and came to a stop. Old Saladrigas dumped three big canteens, and, like Caesar riding his chariot, shouted to the tractor guy to drive off. "El Capirro" opened the first canteen and swore: it was an empty dirty one; so were the other two.

"What the fuck! This is the second time this old poofter leaves us without lunch! No more work, men. Back to the camp we go and I'll tell the Captain about this shit. . ."

It was a welcomed reprieve from the afternoon torment. El Químico didn't mind. He still had a rainy-day tin of Russian meat from the last parcel, some stale crackers, and "Populares" cigarettes aplenty. And before him lay a free afternoon and perhaps an evening of 55-tile dominoes. Or perhaps a clandestine game of trio y pares [a sort of Cuban poker] betting for cigarettes.

In the UMAP, you  lived for the day. And you lived all the week for Sunday, the free day.

And this Sunday was special: there was público, the monthly visit, for the few relatives or friends who cared to come. Who knows where from: Oriente, Havana itself, Matanzas, Las Villas, even Pinar del Rio province? With the chaotic bus service, it was like traveling to Siberia. His family didn't come, but sent parcels every month, so he was well off.

Calabaza was sixteen, but looked less. Reasonably plump. Didn't shave yet. With rare white complexion because he worked in the camp as cuartelero in Barrack, Number One. Just cleaning around a bit, keeping an eye on things, warming water for the bath on a bonfire, and washing clothes for those who could afford to pay for it. And free for the officers and NCOs.  It assured him double rations.  A sinecure.

Well, Calabaza was cute, no denying it. Cupid childish face, pouting lips. As a trusty he was allowed to keep his hair fairly long. And he walked with provocative, mincing gait. Asking for it.  Almost given a cañona once, thwarted by Montero.

But his most noticeable mark of imminent faggotry was first seen by El Químico, our camp "doctor." Calabaza went to the enfermería, looking worried, and showed to him two well developed teats, with rosy erect nipples. El Químico got chagrinned by his own instant hard on, and told him curtly to put the shirt on.

"Look, Calabaza: there's nothing wrong with you except that you are going queer. My advice: don't show them teats to anyone, go to the shower stall alone. Otherwise you are in for a lot of trouble. . ."   That was his diagnosis. Given without much hope. By now El Químico had developed an armor of cynicism.

Calabaza was "Tupemaro:" he was forlorn, received no parcels or visits. His parents and his two older brothers had been helping the Escambray guTupamaroerrillas, the "alzados," and had been deported, the four of them, to a concentration camp in Pinar del Rio. Since he was still a minor, some bureaucrat in the Interior Ministry sent him to the UMAP instead. For "re-education." From the frying pan to the flames. He was destitute, but had a sweet tooth. And his favorite treat was condensed milk boiled for half an hour in the tin, until it got solid and brown. And smoked a lot: cadged cigarettes from everyone. So he had this idea of the raffle, thinking to combine business and pleasure.

They got a good público that Sunday. Plenty home provisions and cartons of cigarettes made its way into the camp's underground economy. However that night in the first barrack there were no dominoes or "trio y pares" games. Everybody was waiting for Calabaza's raffle. Bunches of guys from other barracks were there too. Some of them had bought several tickets.

At eight in the evening, when the crowd started complaining about the delay, "Musmé" the Chinaman solemnly deposited on the rickety table a new straw hat half full with tickets. "And nooow, with uuus. . . ¡Calabazaaa!" he announced and brought great cheers. The aforementioned came forth attired in fresh flour-sack pajamas and plastic slippers, and reeking of Russian perfume. He received the acclaims nonchalantly, as if they were only his due.

Musmé made a great show of mixing the tickets, and proffered the hat to Calabaza, who searched for a whole minute, and extracted one. Silence and suspense. . . "Nuuumerooo. . . 36. . . ¡Cachimbaaa! Who's the lucky winner?" cried Musmé.

"Me!" Shouted Felipito Larrinaga, a tall skinny Negro from Matanzas, of small head and protruding thick lips. And reputed to be the best endowed man in the whole camp, with a dong that in repose dangled to his knobby knees.

Calabaza blanched. There was an anxious murmured conference between him and Musmé and the latter announced: "He welshes! I wash my hands, guys. . .!" An instant protest, and menacing growls.

"Guys, this is a mistake, I'm giving back the milk and the cigarettes---" offered Calabaza, increasingly frightened.

Montero grabbed him by the throat: "You raffled the ass, and you got all this shebang goin' on and now you have to fuck. . .!"

Some queers dragged a bunk to the middle of the aisle, and took off the top mattress. Calabaza's pajamas were rudely torn off and he landed prone in the lower bed. His exposed boobs brought a collective sigh of desire.

The winner asked for a "paravan" for decency's sake---that was two sheets spread at the sides of the bunk.

Another gasp came when the resigned but aroused Felipito took off his uniform and his olive green shorts and his erect long, thick, black shaft was displayed.

Amid applause, the last mounted Calabaza and inch after excruciating inch penetrated him.

Loime, frenzied, took off his clothes too, and planted himself in the aisle, in the quasi acrobatic posture known as the "Skyscraper Throw:" Hands on the floor, extended legs, skinny buttocks pointing to the ceiling.

"I want to die with a big thick one inside meee!" he challenged the most formidable jockers in the audience.

When Felipito was through, he stood up, and saluted with clasped hands and waving arms, like a boxing champ. The racket was by now out of hand. The floodlights from the watchtowers turned on and trained on us, the surprisingly brilliant light coming through the windows. Staff Sergeant "Crazy Horse" entered our barrack, hand on the butt of his Makarov pistol, followed by a detail of guards with rifles at the ready.

"What the fuck is going on here? It's lights out time! ATTENTIIIOOOON!"

The lust became panic. "Crazy Horse" kept us two hours in plantón, legs splayed and hands at our backs. He picked at random six scapegoats and sent them for a stretch at "La Pérgola." This consisted of a tall iron frame erected on the esplanade, and where the punished inmates were hung by their arms with a rope, sometimes for two or three hours.

Next morning Calabaza couldn't walk, and complained to El Químico that he couldn't pass stool. His belly swelled, and that night he developed high fever. He was sent in a jeep to Morón's Hospital. He was diagnosed acute peritonitis and underwent surgery. Afterwards he spent a whole month with a colostomy bag, and got the discharge from the UMAP.

A happy ending for him after all; and also for El Químico, who inherited Calabaza's loot: The infirmary was the only safe place in camp, built as it was of cinder blocks, and with a solid wooden door with a padlock. Calabaza had given all his tins of milk and his cigarettes to El Químico for safekeeping. As we use to say in Cuba, Calabaza "Trabajó para el Inglés---" Worked for the Englishman. ##

CLICK HERE TO GET TO INDEX OF COLUMN THIRTY-NINE