AN EPITAPH FOR IV¡N EL TERRIBLE 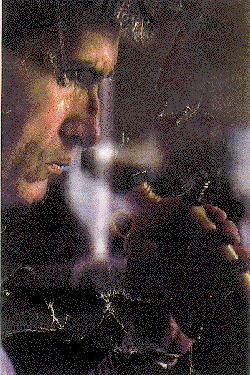 He was regarded as the worst screw in the whole Combinado del Este penitentiary. That's how he won his nickname. He didn't actually know who the historical Ivan the Terrible was, but someone told him that he had been a mass murderer. And from then on he felt proud of his nom de guerre. Dyslexic and too ignorant to go to an officers school, he had only made buck sergeant.

However, Iv·n had an invaluable innate talent, which granted him an easy, even pleasurable duty at "La Tapiada"--- The Hole and Death Row in one. Not for him the daily rough stuff like beating or locking prisoners into the "doghouses," the concrete cells in total darkness, without space to stand or to lie, like a coffin, its only content a stinking plastic bucket.

Iv·n's methods were more refined, and he had devised in his eight years of service a whole arsenal of tricks that could madden the most hardened criminal or recalcitrant policom˙n . Like throwing him to the dogs, literally, to the trained Dobermans and German Shepherds. Or his mock executions: in the early hours he would wake up one of the inmates in solitary, take him into the courtyard and make him kneel. First he'll shoot a blank round into the air, then press the hot barrel of the Makarov on the nape, and shoot another. Some victims died of heart attack.

But when the rats started once more deserting en masse from the ship that refused to sink, the idea came to him with dazzling clarity, a revelation: Why not go to Miami too? And start a new life: to have a small apartment for himself alone, a car, a color TV, and a VCR to watch those Rambo movies he had heard about, and eat steaks, those rare privileges unthinkable for a sergeant. Right then and there at 1:3O in the morning of a graveyard Friday shift he went AWOL, a small bundle under his arm.

In belated buses and hitchhiking he arrived at dawn at Santa MarÌa del Mar. The white sand in both directions looked like a miniature shipyard: truck, bus and even tractor inner tires being inflated, tied together and covered with pieces of plywood or canvas---fast, a race against time, like a gold rush. Sun like a Japanese flag rising in the cliffs behind. He mixed with the groups of also olive-green garbed guardafronteras, Kalashnikovs on their chests, who just ten days before would have shot dead every escapee on sight, the whole crowd of them. Instead they watched with glee and even a tinge of envy the shouting horde that entered the water, the formerly impassable Red Sea, now opening before them by a whim of the aged, olympicaly remote, harassed tyrant, bluffing once again with human chips.

Iv·n hid in the uva caleta bushes and changed into civilian clothes. Then buried his uniform and walked east through the beach. Predator prowling. He went into the water and hijacked a seaworthy looking raft: six big tires covered with tarpaulin, some shelter. At gun point he dislodged the five huddled occupants---a young man, two women and two children in school uniform. He climbed on and departed. The July sun ascended fiery in the pale blue sky, the rafts drifted apart, became dots in the distance. Only midday, and he had finished all the water aboard . His packages of Populares and the matches wet despite the plastic bag. Unsmokable. Sundown, then an unending, interminably long night. The slow motion, the lullaby of the warm water---at first, darkness seemed a respite from the scorching sun. Until he began to shiver in the cold, and it was even worse.

The phosphorescent silhouette of the shark emerged out of the black water, biting, compressed air exploding, pieces of rubber flying, cataract of plankton, and one tire gone, and another, the huge bullet-like head twitching, jaws snapping, gleaming rows of teeth, splashing, revolving, whirling like a maelstrom, and then gone, disappeared, leaving behind the sheer naked terror, the brain drained, squeezed out of adrenaline like a sponge.

The waves became rougher, numb fingers clinging to the ropes, the will on autopilot, every while waking and gazing around into the surrounding black waters. Another dawn came of unmitigated thirst, and the almost irresistible compulsion of drinking sea water. He lost hope and fell soundly asleep, prostrated on the four tires, feet on the water. Until his weary eyes opened to the mirage of the Coastguard cutter, half a mile away and approaching fast. Suddenly alive and rational again, he sat, waved his arms and shouted. Then threw into the sea the incriminating pistol, red military book and blue internal passport.

Raft hauled with a long shining hook, the black iron flank of the vessel looming and he felt like jelly and as frightened as a surrendering prisoner. The language he didn't understand at all engulfed him, oppressive---Americanos [°Fideeel, segurooo, a los yanquis dale duro!] . Helped aboard by two sailors dressed in khaki; and then another asking questions, talking Cuban like an extranjero. The mug of steaming hot coffee that tasted like glory and the first RegalÌas cigarette of freedom.

The vessel sailed due east, picking around 50 more balseros in the way. About 150 in all, the ship overcrowded. The stories of empty rafts, of frenzied sharks. Of cowardice and self-sacrifice. Sleeping everywhere there was space available. Many still afraid, but Iv·n the most. Hot tomato soup. Coca Cola. Real coffee. Fresh donuts. Milk. And cellophane wrapped packages of cigarettes, MalbÛro, RegalÌas, just for the asking. Things that not even the macetas, the rich among the miserables, or the jineteros, the hard currency

A thousand balseros arrived each day, many decent citizens, but many hardened criminals freshly released from prison

dealers, had. The land was visible sometimes in the horizon, so near but already so remote and alien, like in another dimension.

Then Guant·namo base. Fences all around, mine fields, sentry towers, machine guns, attack dogs: just like the Combinado. Sleeping eight to a tent. Iv·n kept to himself. Spent all day on his bunk, leaving only for the line at meal times. Surveying the increasing crowd, a thousand balseros a day arriving, most of them quiet, decent people, but criminals freshly released from prison among them. Unmistakable for the trained eye. Their carcelary haircuts. Their way of walking, strutting. The tattoos [No hay amor como el de madre] [NacÌ para crear dificultades] . Even a whole San L·zaro drawn in a back, to the minutest details. Or given away by their accent. Some packed knives, despite the systematic shake-downs by the American soldiers. He recognized no faces: too many of them in eight years. Only that now he had no uniform, no chevrons, no pistol, no brass knuckles. He was on the wrong side of the bars. And he began to repent of his brash escape.

One night at eleven or so he went to the latrines and they jumped him. Gagged and tied him, arms behind his back. This time he knew immediately that he was going to die, the only remaining question: how? Heart bursting. They prodded him with their knives, rolled him through a gap in the hurricane fence; took him to the bushes, went uphill, where there were trees. They stopped under an old, thick iroko tree. The moon was round and splendid, and besides some had flashlights. There were eight of them, all black, all Abaku·, all EfÛr. They formed a semicircle around him with his back and bound hands against the tree trunk.

Passing pungent joints of marijuana and a bottle of cheap rum calmly among themselves while their eyes partied on this notorious screw whose exploits were well known through the grapevine, one of them, an UsagarÈ, came forward. Short and brawny, with shaved oiled head. He kneeled and touched the soil. Then raised his right hand to the sky and invoked for several minutes in Yorub·.

The semicircle opened, and a last man came in and stared coldly at Iv·n . White, in his early twenties, with short cropped brown hair, green eyes and what was once a handsome face now criscrossed by scars, he seemed somehow familiar to Iv·n. Then came a flash of recognition. Three years before. La Tapiada. Iv·n had loosed on him four inmates, all lifers. Gang rapists. Afterwards Ivan had sent him to La Patera, the homosexuals' ward, where the strong jockers completed Iv·n's handiwork and made a queer out of the young man.

It was the scarred face of death itself, austere, impersonal, unmoved and unforgiving.

"Here, it's all yours," said one of them, named Lusaga, who handed the knife, handle forward, to this man. Then, an amazed Ivan saw the world turned upside down. His captors went back into the base rejoicing as they passed the word around.

CLICK HERE TO GET TO INDEX FOR COLUMN TWELVE