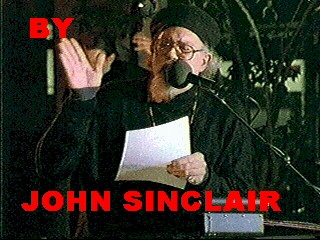 Amsterdam, September 23, 2004"It's three o?clock in the morning at the secret headquarters of the International Roots Music Collective in Amsterdam and nobody's quite ready to turn in yet. Head Root Clay Windham, a guitarist and bassist from East Texas by way of New Orleans who's been here just over a year now, is putting his magic touch on the recording console set up at one end of the long office suite, cuing up a track cut a couple of days ago with singer Carla Van Zanten.

The Polish kids who've been crashing across the hall, Klaudiusz Klosek on trumpet and Mateusz Ruczynski on hand drum and mouth percussion, take a final toke off the hash pipe and shuffle across the room to where the microphones stand awaiting them. The tape rolls and Klaudiusz lays down a tasty trumpet obbligato to Carla's vocal that blossoms into a brilliant full-fledged solo laced with intelligence and wit that belies the player's tender years.

A well-travelled young woman from Canada named Noa Nirnberg dances loopily around the floor in synch with the sounds wailing through the playback monitors, and Ludwig, the Surinamese music master and resident computer genius, ponders a thorny technical problem at the mixing table with the mental assistance of a big conical fatty made of tobacco and fine hydroponic Dutch marijuana.

It's a typical night of merriment and music making at the International Roots Music Collective, the product of a diverse bunch of players whose actual composition changes pretty much with the phases of the moon. The Collective is located in what they call an "anti-squat," an unrented office building in the middle of an industrial park in the far southeastern sector of greater Amsterdam, where the building's management has allowed diverse artists and other humans to occupy the office suites while management seeks a proper corporate tenant for the building.

The anti-squat concept grew out of the popular Dutch practice of people moving into unused buildings and squatting there without rental fees until they're either evicted or stay long enough to petition the local government to recognize their 'squatters? rights? to the building and gain ownership for themselves. The IRMC headquarters are in a modern office building surrounded by busy corporate office complexes operated by companies like McDonald's (the local training center is right next door), Securicore, Vaillant heating systems, Spring, and the like. The area is crowded with office workers and their cars all day but virtually deserted at night when the anti-squatters do their art work.

Clay lucked into this situation when he took on a guitar student who turned out in real life to be responsible for overseeing this fully-outfitted but empty office building and offered his teacher a substantial space in which to squat and pursue his musical dreams. Clay and an ever-changing collective of fellow musicians began rehearsing at the space, and then one night Clay met Ludwig at a party and was soon introduced to a producer and engineer named Wolf who had a little recording studio that was being pressed to find a new place for itself.

The next thing they knew, Wolf and his posse had found appropriate space to set up their equipment, and Clay Windham and the IRMC were the proud hosts of their own cooperative

How did John Sinclair
get from Detroit to
Amsterdam?

recording facility. The group's benefactor, Clay's guitar student, decided to underwrite the cost of installing proper musical gear and keeping things going, and all of a sudden the former member of the New Orleans Jazz Vipers was watching his dream unfold right in front of him.

Myself, I lucked up on the IRMC in cyberspace, sitting at my computer in Detroit and trying to figure out how I was going to get back to Amsterdam and where I was going to stay when I got there. My first foray into the land of the free last winter had been marked by three months of solid scuffling and the constant search for someone to take me in for the night. I had no housing budget and barely enough cash to deal with the daily food and drug administration issues, and I ended up beholden to my guitarist and musical director, Mark Ritsema, for taking me in to his Dutch beatnik apartment in Rotterdam and putting me up for most of my exploratory stay.

Now I'm totally convinced that I must make my home in Holland, and this time my stay here is scheduled to last from mid-August through the winter until Mardi Gras, and?except for three weeks back in the States?I'll be trying to find enough work here to live on, rent an apartment and bring my wife Penny over to join me.

This is a pretty strenuous transition for an impoverished American poet who celebrates his 63rd birthday on October 2nd, but in the middle of my frenetic musings about the immediate future there appeared an e-mail from Clay Windham in Amsterdam announcing the evolution of the Roots Music Collective and the establishment of the secret headquarters in the southeast. I fired back with a query about the possible availability of temporary living space for visiting artists and Clay said c?mon, so I finally had found a place to hang my hat in the "Dam.

Then there was the problem of a plane ticket, but my friend and benefactor from the wilds of Vermont called with the promise of a $500 donation and my guardian angel from San Francisco woke me up early one morning with a mercy call to say that he'd arranged my passage by virtue of some excess frequent flyer miles at his disposal, and all of a sudden I'm virtually up in the air already. Finally, my girl at High Times, Annie Nocenti, expedited the payment of my $500 stipend for a story I'd written for her, and now I had some eating money as well.

Things were fairly quiet when I arrived at the IMRC, but that wouldn't last too long. The great Texas harmonica man, Paul Orta, was in residence between some dates in Germany and a festival in Belgium, and he and Clay were busy getting a few tunes together for the next show. Paul has been touring Europe for years and has a dozen or so CDs in circulation dating back to his days in Austin when he was with the house band at Antone's backing up Jimmy Rogers, Lazy Lester, Stevie Ray Vaughan and a host of others. He had brought Clay over to Amsterdam in the summer of 2003 to play some dates together and was now enjoying the benefits of having served as the godfather of the Roots Music Collective.

I spent a couple of days in Rotterdam with Mark Ritsema getting ready for our opening slot at the DKT/MC5 concert at the Paradiso in Amsterdam on August 22nd, and when I got back to HQs I met three more members of the Collective newly in residence. They were all terrific people, and the funniest thing was that they'd come all the way from Arkansas on their first trip to Europe: The Right Reverend Ernie Cleveland of Hot Springs on washboard, percussions and vocals, and the Flying Magoos out of Eureka Springs?Gates Magoo on guitar and vocals, the great Mary (Opal) Fly singing with deep soul and playing alto and soprano saxophones like nobody's business.

Clay knows Mary from New Orleans, and now that she's a Magoo she and Gates have been in Europe for several months, touring Germany and the Netherlands with Rev. Ernie, playing on the streets and spending some time during the formative days of the IRMC in the anti-squat in the southeast. The three raggedy razorbacks have just made their way through a series of small German towns, entertaining the citizens in the streets, singing for their suppers and staying one step ahead of the long stern arm of the law.

Ernie and the Magoos are at the pad when Clay comes home one night with the two Polish kids he found playing on the streets of Amsterdam, and before they head back to the States Wolf and Ludwig have shown up with the first installment of studio equipment for the Collective. Paul Orta has come and gone on to Madrid and London and Berlin, and Noa is yet to show up.

As they prepare to leave, I tell the denizens of the two Springs that they have to hook up with Dotty Oliver in Little Rock because I'll be writing about them in my On The Road column in the Free Press. So hey there, Ernie and Mary and Gates, see you when you get back to the International Roots Music Collective in Amsterdam!

A parting note for my many friends on the East Coast and in the Midwest: on this birth day of John Coltrane?a Holy Day of Obligation in any country in the world: I'll be making a short trip to the United Snakes next month to participate in several extraordinary events. First is two nights of 'speaking of Jazz? concerts to be staged in New York City October 22?23 as part of the opening celebration of the new Jazz at Lincoln Center concert facility, where poets Oscar Brown Jr, Sonia Sanchez, Amiri Baraka, Gil Scott-Heron, Yusef Komenyaaka and this writer with be featured with musicians Sonny Fortune, Reginald Workman and Rashied Ali.