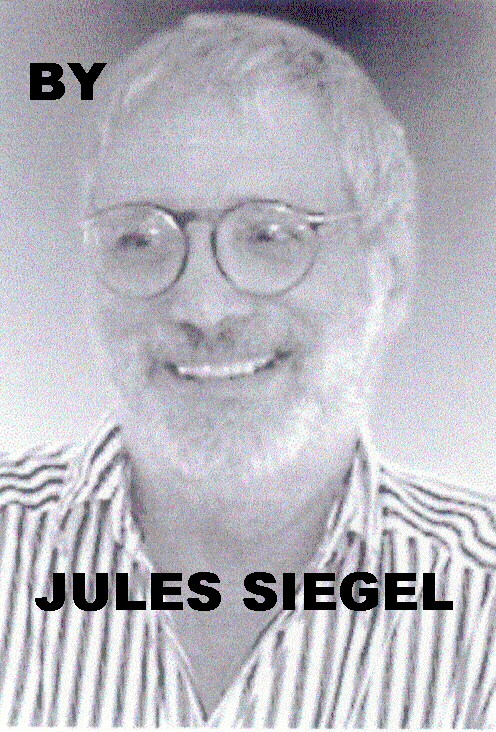 [JULES SIEGEL can be contacted at Apdo. 1764 77501-Cancun Q. Roo Mexico. His website can be found at http://www.madlaughter.com . Another of his websites, listed as "Newsroom-l, news and issues for journalists" can be accesses at http://www.newsroom-l.net .]

I was very moved Saturday morning to learn that Brian Wilson received a five-minute standing ovation at the conclusion of his Smile performance. In "Holy Pop Relic" http://slate.msn.com/id/2095025/ , Jeff Turrentine mentions my role in the saga of Brian Wilson's Smile project.

Although Turrentine correctly reports that the Saturday Evening Post killed my story, it was later published in Cheetah magazine, October, 1967, as Goodbye Surfing, Hello God!---the Religious Conversion of the Beach Boys. It's been anthologized in at least four books, most recently in Library of America's Writing Los Angeles.

Without any false humility, I can say that I was one of the people who invented rock journalism. Journalists such as Al Aronowitz, Richard Goldstein and I were among the first to write about rock in mainstream media without being condescending or demeaning. Nonetheless, I never thought of Goodbye Surfing, Hello God! as rock journalism. It was a pretty far-out piece even for regular journalism at the time. I don't think many celebrity pieces before or since have ever gotten that close to a subject and been written about it.

Brian was quite upset about it. I heard that the Beach Boys were still complaining about it a few years later in Tom Nolan's Rolling Stone interview. Maybe now he's got some more distance on it and can see that Goodbye Surfing, Hello God! was a principal force in creating the myth of

Smile. I know that others did write about it at the time, but some of them talked to me first. Other than David Oppenheimer, I was the only one in the major media who took Brian seriously, and even David talked with me at great length while he was making his documentary.

In reading over my story 37 years later, I see some rather awkward moments. At the time, Saturday Evening Post writers did not usually mention themselves in stories. I wanted to do this story exactly as I would have written a short story or a segment of a novel. In order to get around my adherence to the convention of impersonality, I had to describe myself as a "Saturday Evening Post" writer and a "friend." Both were true, but these days I would just use "I" or "me." Some of the writing is a little too self-consciously jazzy, but I was young then.

Despite these minor flaws, I'm still very happy with the story, and I am even happier that Brian has finally achieved his dream. He was a giant then and he is a giant now. All of us who struggle against the mainstream currents can take heart in this outcome. For once, a good guy wins. God bless Brian Wilson! God bless all artists who try and fail, and try again and fail again, ad infinitum, but never give up.

Goodbye Surfing, Hello God! can be found online at http://www.cafecancun.com/bookarts/wilson.htm  ##

ON THIS 40TH ANNIVERSARY OF BEATLEMANIA!

A 615-PAGE PAPERBACK THAT TELLS YOU MORE ABOUT BOB DYLAN AND THE BEATLES THAN ANY OTHER WRITER CAN TELL YOU, BECAUSE THE AUTHOR WAS THERE AND NO OTHER WRITER WAS

YOU CAN ORDER 'BOB DYLAN AND THE BEATLES' FROM 1ST BOOKS LIBRARY AT www.1stbooks.com AT $17 A COPY OR YOU CAN PURCHASE THE BOOK FROM BOOKSELLERS AT $25.95 A COPY

0R, IF YOU WANT A COPY THAT'S NUMBERED AND SIGNED, SEND A UNITED STATES POSTAL MONEY ORDER FOR $17 PLUS $3 FOR SHIPPING AND HANDLING TO  THE BLACKLISTED JOURNALIST, BOX 964, ELIZABETH, N.J. 07208

OR, IF YOU WANT THE BOOK SHIPPED TO YOU VIA PRIORITY MAIL, SEND A MONEY ORDER FOR $25